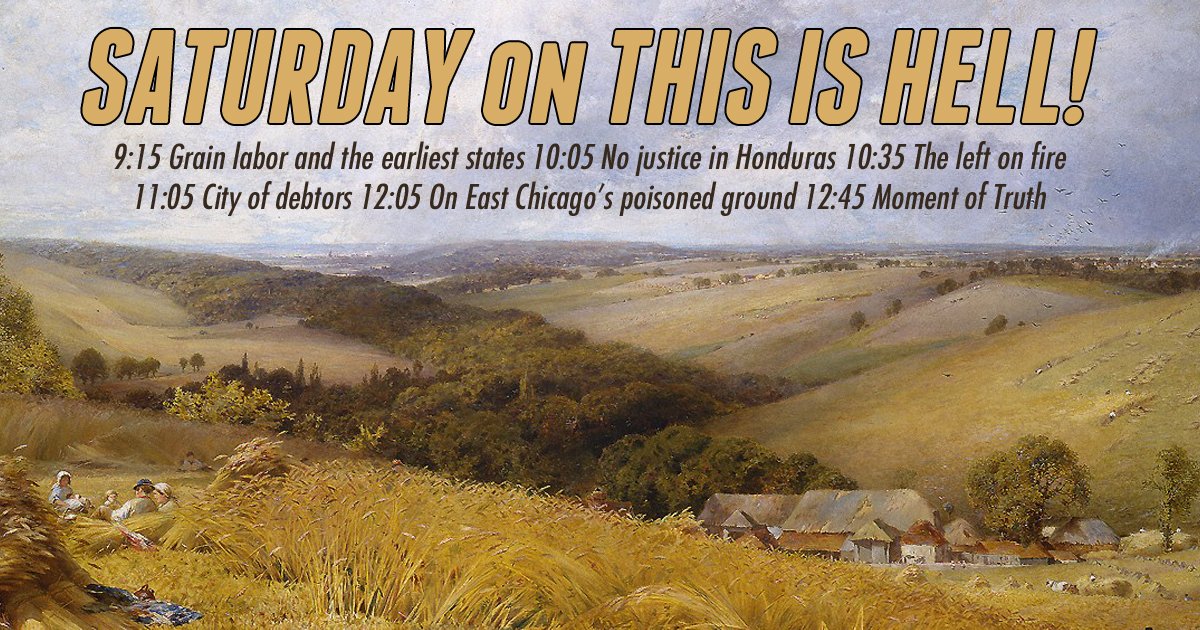 James is author of Against the Grain: A Deep History of the Earliest States from Yale University Press.

Sarah wrote the articles Families fear no justice for victims as 31 die in Honduras post-election violence and US recognizes re-election of Honduras president despite fraud allegations for The Guardian.

10:35 - Correspondent Ed Sutton watches the left run out the clock fighting itself while the world runs out of time.

Ex-expat Ed has been back in the US for a year now, running the highly recommended site Antidote Zine.

Anne is author of City of Debtors: A Century of Fringe Finance from Harvard University Press.

Rebecca wrote the article On Poisoned Ground: East Chicago’s legacy of lead pollution for The Baffler.

Most Popular Interviews of 2017 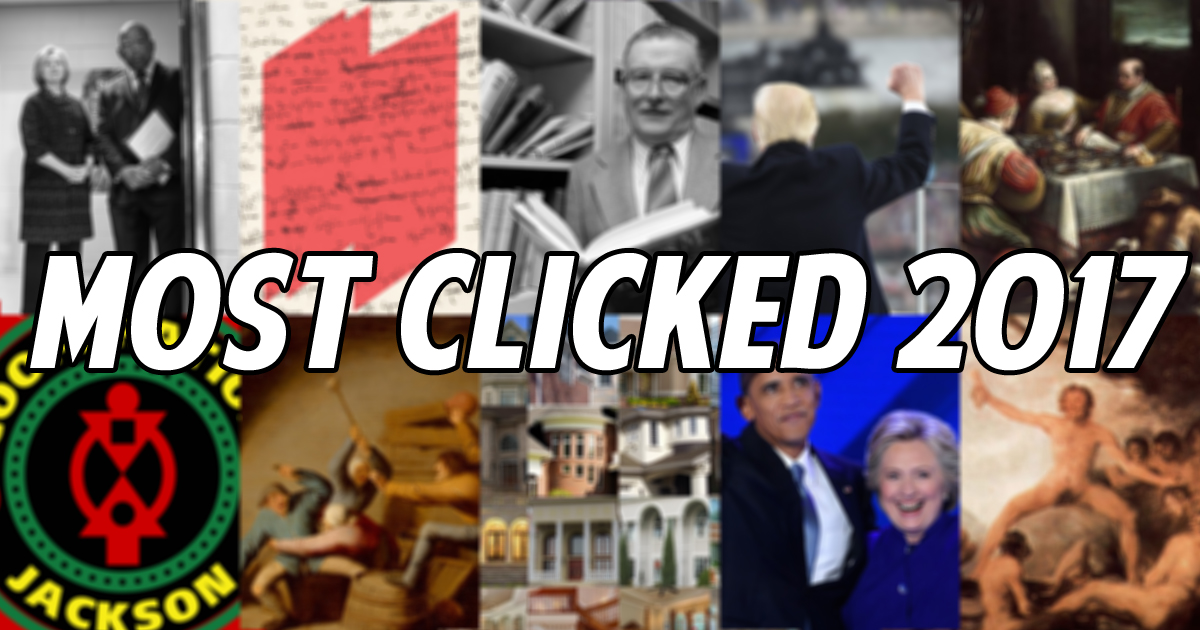 1: We don't have to do anything: How the Democrats found their dead end. | Thomas Frank

2: No path but revolution: Introducing the Communist Manifesto. | Jodi Dean

3: Trump is the endpoint: On cruelty and isolation in American politics. | Henry Giroux

4: Replace the system, not the parts: Change beyond statues and hashtags. | Bruce Dixon

5: Down with people: How cultural elitism went mainstream. | Angela Nagle

7: The disintegration has already begun: Austerity politics at the end of Europe. | Yanis Varoufakis

10:  To protect capitalism from democracy: On the right's revolutionary plan for America. | Nancy MacLean

Moment of Truth: The Socialist Leisure Work Ethic and the Spirit of Falafel

Well, it's happening. The days are starting to get longer. More daylight time for me to fritter away, thumbing my nose at our rapidly degrading society and its sadistic norms. Yeah, I've got a bad attitude. Cuz, friends, our society runs on pure bullshit, and everyone knows it. But that's no reason to operate a mediocre restaurant. Well, maybe it is.

Maybe our society's current completely ass-upside-down arrangement of priorities is a reason to serve mushy falafel with watery tahini. The privatization of nature, the draining of wealth from working-class communities, and the poisoning of our air, soil and water, just might justify serving harrisa seemingly flavored with a hint of Murphy's Oil Soap. I'm not a chef, I'm not a restaurant manager, I'm not even a food saboteur, so I don't know what-all goes into making such decisions.

Our nation's systemic impoverishment of its elders and its children is an international scandal, as is our substandard health care system, and our underfunded public education system, if it can even be called a system, as fragmentary and haphazard a jalopy as it is. I'd think a restaurant would take the opportunity to provide food to their patrons of an enjoyable nature, given how parsimoniously joy is being distributed these days. Is now really the best time to overcook chicken shwarma till its texture is that of cork paneling? Surely now is the least opportune moment for serving dry shwarma, which can only exacerbate a diner's sorrow rather than relieve it.

Lentils should be cooked, of course, but a bit of resistance is desirable. They aren't rolled oats, for crying out loud. A lentil salad shouldn't be slurpable, like a milkshake. And serving them thus is no way to take my mind off Donald Dump's spastic narcissism, or Ajit Pai's perverse misguidance of the FCC, or Betsy DeVos's uneducated leadership of the Department of Education. I'm not telling you how to run your business. I'm not a businessperson. I'm only expressing what countless patrons are probably thinking.

They're thinking, "This food is only making us more dissatisfied. This food is monstrous. This food is corrupt as all hell. This food is the opposite of food, the way Supreme Court Justice Neil Gorsuch is neither supreme, nor courtly, nor just."

What's with the tiny plastic bowl-shaped micro-vessel for pickle? Where did you find these, is there a store that... read more 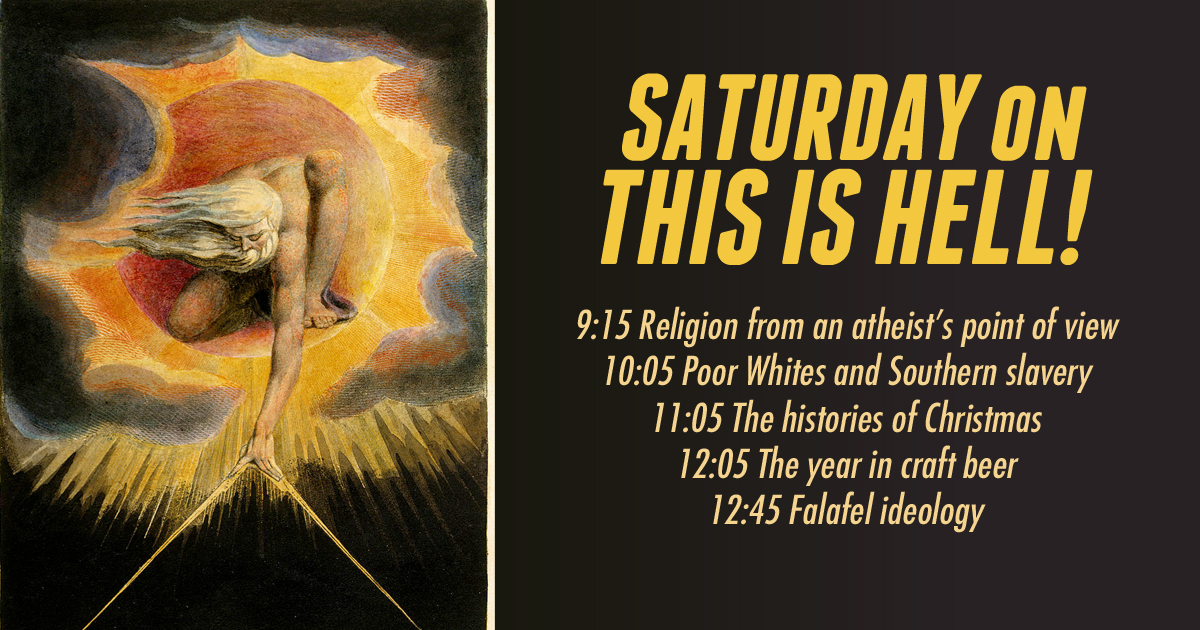 9:15 - Philosopher Tim Crane explains what atheists miss when they view religion from the outside.

Tim is author of The Meaning of Belief: Religion from an Atheist’s Point of View from Harvard University Press.

Keri Leigh is author of Masterless Men: Poor Whites and Slavery in the Antebellum South from Cambridge University Press.

Judith is author of Christmas: A Biography from MacMillan.

12:05 - The Hopleaf's Michael Roper reviews the year in craft beer capitalism, and the year to come.

Michael is owner of Chicago's The Hopleaf Bar, in its 25th year. Try the Bitterballen.

12:45 - In a Moment of Truth, Jeff Dorchen discusses The Socialist Leisure Work Ethic and the Spirit of Falafel.

He's talked about Socialist Leisure before, but this falafel thing is definitely a new development in his ideology.

While listening to the Nick Cave and the Bad Seeds record, Murder Ballads, I was not looking for inspirational messages. I was not expecting any. But then the song came on, "Death is not the End," and suddenly a space opened up in my brainheart, or heartbrain, for the idea of the persistence of consciousness after the death of the body, and I got to feeling interested and cheerful. Interested again in life, which had recently become disturbingly empty, and cheered by the quasi-metaphysical thinking the brainheartspace allowed.

Occam's Razor is the idea that the simplest explanation is most likely correct. Writer, musician, and sports philosopher Robert Jacobson coined the term "Bozo's Mallet" to denote asinine misuse of the simplest-explanation theory. Or, it's the doctrine that the stupidest answer is usually the correct one. In any case, either Occam's Razor or Bozo's Mallet tells us the world exists. It sure seems to. Just take a look around. Or, if you're in the dark, grope around. Feel that?

And yet the world also seems not to be there. The present moment is fleeting. Matter and energy transform. All is transient. Your eyes and ears play tricks on you. Time leaves the past behind and moves into an unknown future. Experience is subjective. And when we fall asleep, we seem to enter another world in our dreams.

But the amount of detail reported about the external world is infinite and infinitesimally specific. If it's all an illusion, it seems like overkill. I would've been satisfied with a world that didn't get anymore finely-grained than molecules. If the illusionist wanted to fool me into believing in an external reality, there was really no need to come up with quarks and, for goodness sakes, a particle-wave paradox. Really, I would've been satisfied if the world were made out of pretzel dough. Or balanced on the back of a turtle. Or an infinite stack of turtles. You could've sold me anything.

If all that detail is purely for the sake of those with a desire to continue investigating ever deeper or farther into reality – well, I'm not one of those people. I check in on those people, just to keep up with what they're thinking, but much of it is gibberish. It's definitely wasted on me. Earth, Air, Fire, and Water would've been plenty of mystery. And yet, if the illusionist went to the trouble to make an illusory universe with details for... read more 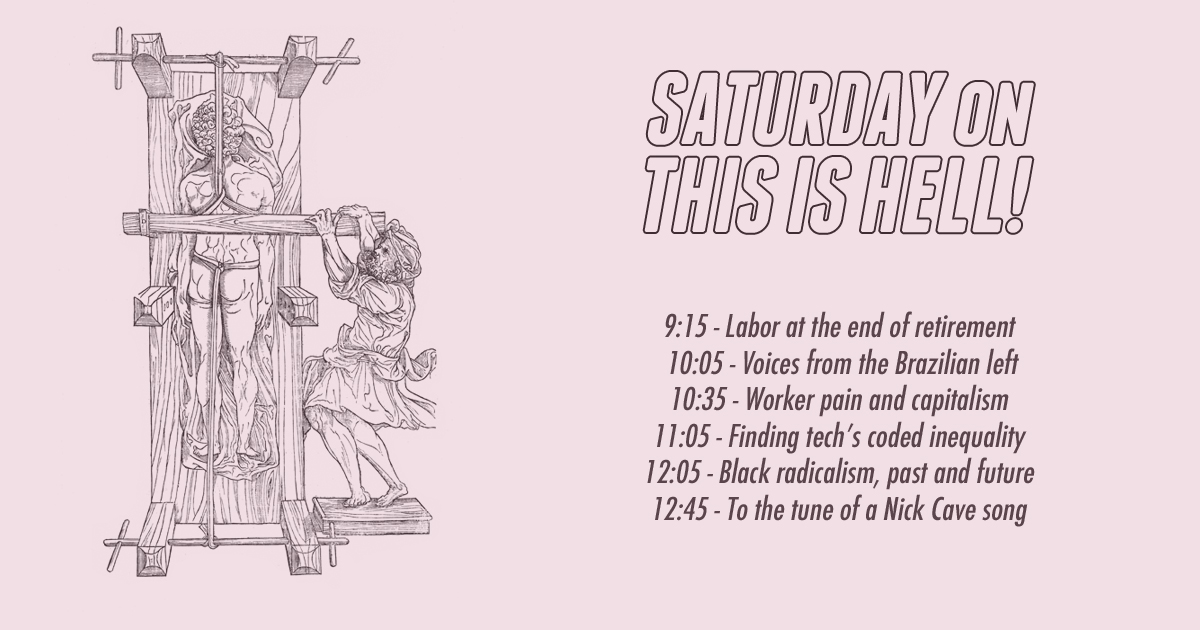 9:15 - Journalist Jess Bruder explores the low-wage labor of senior nomads working at the end of retirement.

Jess is author of Nomadland: Surviving America in the Twenty-First Century from W.W. Norton.

Brian's book of interviews, Voices From the Brazilian Left, is available to order now from Brasil Wire.

Aaron wrote the essay A Pain in the Back for The New Inquiry.

12:05 - Historian Robin D.G. Kelley finds the future of Black radicalism laid out in the paths of ancestors.

Robin wrote the essay "Winston Whiteside and the Politics of the Possible" for the Verso collection Futures of Black Radicalism.

12:45 - In a Moment of Truth, Jeff Dorchen's imagination is sparked by a Nick Cave song.

Jeff keeping it light for the holidays.