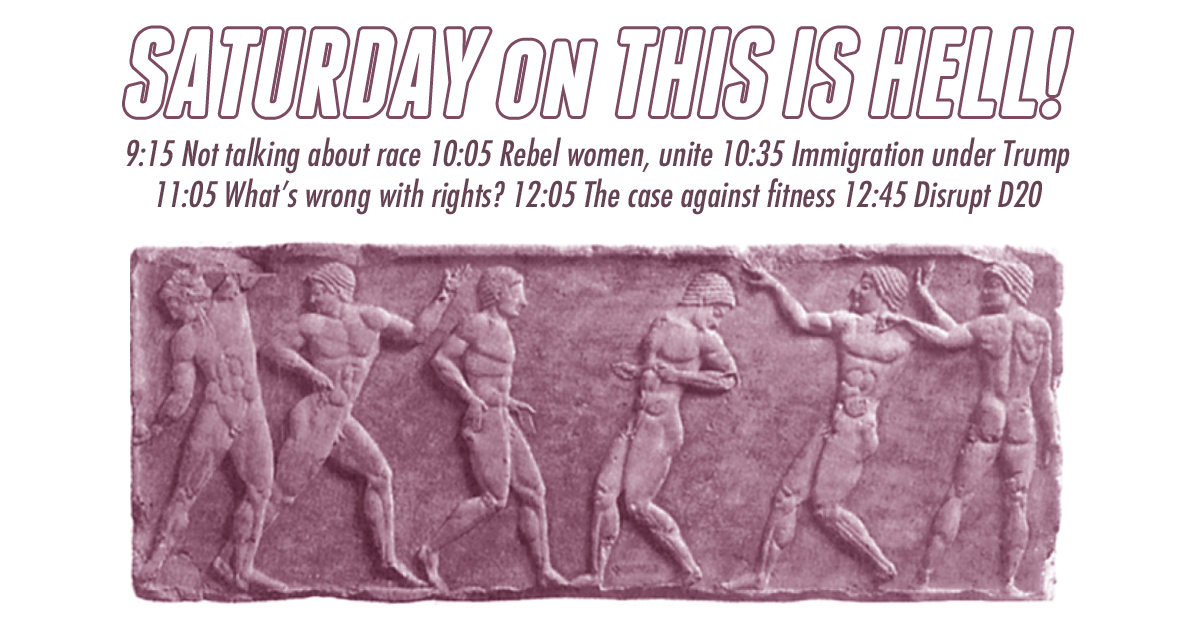 9:15 - Journalist Reni Eddo-Lodge explains why she is no longer talking to White people about race.

Reni is author of Why I’m No Longer Talking to White People About Race from Bloomsbury.

Brianna wrote the articles A Tale Of Two Atrocities: From Tululché to New Bedford and How Democrats Can Negotiate Effectively On Immigration for Current Affairs.

12:05 - Writer Barbara Ehrenreich makes a case against the utopian culture of personal fitness.

Barbara wrote the article Body Work: The curiously self-punishing rites of fitness culture for The Baffler.

12:45 - In a Moment of Truth, Jeff Dorchen looks at the Dungeons & Dragons icosahedron for hope.

I'm guessing Jeff would play a Troll Bard. Is that a possibility within D&D's race/class system?

Moment of Truth: No Peace In Our Time

Last week I came out of the jungle to find we were still fighting WWII, and I hate to say it, but fighting and hate were what WWII was about. Is about. Still. That Winston Churchill fellow was a great hater and fighter of Nazis. He got his training while hating and fighting the people he colonized. It was damn effective training, too.

The movie, Dahkest Houh, is about Winston Churchill, starring Gary Oldman as Mrs. Doubtfire, a man who is divorced from his country but, in order to be close to his children, puts on a muppet-like prosthetic disguise and gets a job as the nation's nanny and mascot.

The movie begins with the evacuation of Dunkirk, which required the sacrifice of 4000 men's lives to rescue 300,000 from certain destruction. It was a calculated sacrifice. Churchill made a decision no gathering of Talmudic rabbis could have come to. Churchill was good at presiding over death. That training in the colonies, don'tchy'know. The British needed to save the 300,000 so they could fight the 3 million who were in Hitler's army, so the 4000 had to die.

Churchill was the last in a long line of stocky jowly belligerent imperialist British alcoholics, and he, like Barack Obama, came into office only when his country needed him to clean up a terrible mess. Like Obama, he performed the task, but unlike Obama, he didn't resort to half-measures, or one-quarter measures, or an even lesser fraction, he didn't leave most of the job undone for the next administration to dismantle, and he didn't hire the exact people causing the problem to try to deal with it. He didn't hire Himmler or Field Marshall von Sauerkraut to run the military for him.

If Churchill had run the British war effort the way Obama ran Wall Street reform, it would have been Goebbels saying "We shall fight in the fields." The British people would have been admonished to lie down in the middle of the road so the German tanks could crush them easier. And don't forget to hand over any Jewish neighbors!

The Atlantic Magazine just posted a worthless article (Is Big Business Really That Bad?) about how big corporations are being unjustly vilified. Kind of like when the NYT urges us to be nicer to Nazis. If you're suggesting that big corporations will respond to reasonable regulation, you are Neville Chamberlain announcing peace in our time. Hitler has invaded country after country on the continent,... read more 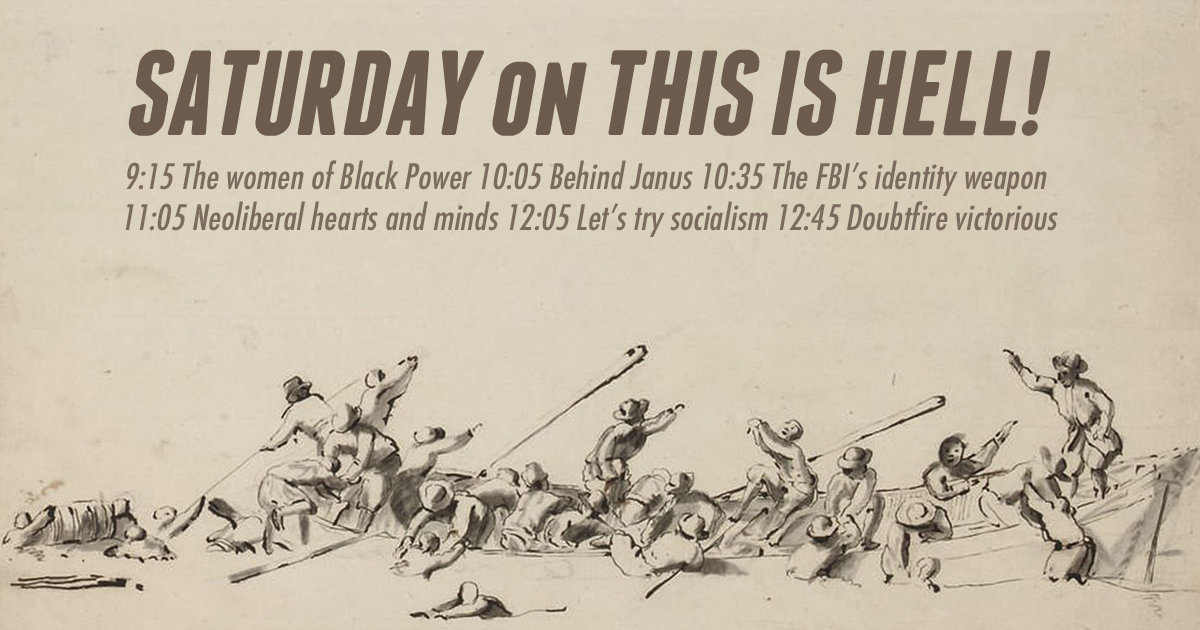 Ashley is author of Remaking Black Power: How Black Women Transformed an Era from UNC Press.

Mary wrote the feature Behind Janus: Documents Reveal Decade-Long Plot to Kill Public-Sector Unions for In These Times.

Julie is author of the book Neoliberalism from Routeledge.

12:05 - Columnist Elizabeth Bruenig looks beyond the failures of liberalism, to the possibilities of socialism.

Elizabeth wrote the op-ed It’s time to give socialism a try at the Washington Post.

12:45 - In a Moment of Truth, Jeff Dorchen explains how Mrs. Doubtfire won WWII.

I just don't have the Mrs. Doubtfire knowledge to write another sentence here.

Moment of Truth: It Ain't Over Till It's Over, and It Ain't

Anyone remember that Japanese soldier, Hiroo Onoda, who had been out in the jungle, patrolling a small island in the Philippines on behalf of the Emperor, then wandered out one day to discover World War II had been over for 29 years? There was a docu-drama about it called "Gilligan's Island" season 1, episode 15.

Well, that's me, but inverted. I've been in the jungle trying to hold down the territory for no one but myself, or so I thought, and I'm wandering out right now, only to realize World War II is still going on, that's what's been itching and aching and stinking so bad all these years, that where all that noise and smoke was coming from, the workers and poor people and crushed and dehumanized need my service, such as it is, because the enemy is still attacking, so I refuse to surrender.

Or if it's not World War II, it's another Civil War. Or the same one. Or another peasant revolt. Every war is always a civil war, because the borders are imaginary, one of the enemy's tactics in their strategy of divide and conquer. There was civil war over slavery, or was it more than one? In any case, it's sure not over. The one over labor began in the 1800s, and that's still going, labor had a few early victories but now the fascists are winning. The one against poor people, don't even know when that started. Probably when the first rich person sat in his palace on the Euphrates, saw some folks doing work and got paranoid. The one against black equality beginning in the 40s – the 1440s. And there's the formless, asymmetrical, unconventional, continual one against black people, children, poor people, old people, weirdoes, the essentially queer, and just about anyone who isn't a congenital asshole.

All I know is, there's some war, it started a long time ago, and it's still raging, like the most durable priapism in history. White profiteers and their bigoted supporters have been the enemy for a long long time now, fighting against whatever group can be stigmatized as a threat to white people's dainty little picnics. Oh, they love their picnics and their white linens, those white people. You're right, Whitey. We are coming for your frilly Ku Klux Klan church socials. We're going to pee all over them. You will not get the dark stains out of that linen because we all have kidney problems. Maybe if you stopped holding health care hostage in this asymmetrical... read more 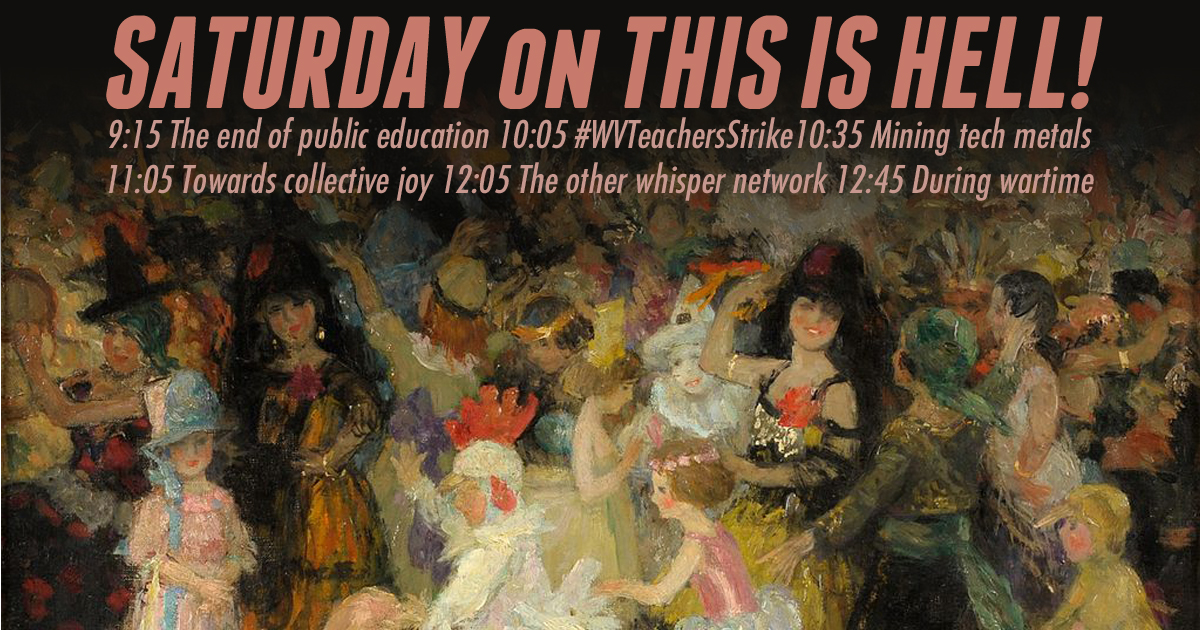 9:15 - Author Noliwe Rooks examines profit and segregation at the end of public education.

Noliwe is author of Cutting School Privatization, Segregation, and the End of Public Education from The New Press.

11:05 - Author Lynne Segal explains why transformative happiness can only be found with other people.

Lynne is author of Radical Happiness: Moments of Collective Joy from Verso.

12:05 - Writer Katie Roiphe makes the case that Twitter feminism is bad for women.

Katie wrote the Harper's cover story The Other Whisper Network.

12:45 -  In a Moment of Truth, Jeff Dorchen stumbles out of the jungle to realize the war is still going on.

Already has the beard for the look.

Wayne LaPierre, who has made millions as the public face of the National Rifle Association, stuck his public face into the national debate on whether children have the right to protest the mass killing of other children. He says, emphatically, NO. LaPierre calls the act of children speaking out against gun availability in the US, and the inevitable bloodshed it leads to, communism. And socialism. And he calls Barrack Obama a socialist, and says that if the Democrats get control of any of the three branches of government, they, being socialists, will continue the job they began of destroying our freedoms.

No wonder crazy fascists are killing children, right? I mean, children are communists. Look at how their communist teachers teach them to share. They're trying to take away our freedom. So of course anxious white men are going to try to kill them. They listen to Wayne's story, get nervous, and go out and kill schoolchildren to protect America.

Wayne calls his wondrous fantasy, with a straight face, "the truth." In his fabulous tale, in his imaginary USA, racism, homophobia, xenophobia, and misogyny don't exist. Those problems are invented by "Them," people who just want an excuse to complain and riot. No black men ever get killed by police, no men use their positions of power to abuse and rape women, Donald Dump hasn't enacted draconian laws against people who've migrated here from other countries, gay people are treated just the same as if they were just as good as Wayne LaPierre.

I'd like to propose a competing narrative, Wayne. In this fable, it's the neo-Nazis in the USA who believe Dump is another Hitler. That's why they came out with tiki torches and guns to march. They believed if they rose up he would give the word to kill non-white people. Now they're disappointed. He's a big disappointment, that Dump, just like Hitler.

Hitler loved torches, because he was part of the long tradition of torch-bearing, monster- chasing mobs – lynch mobs, they're called – and he would have loved tiki torches if... read more