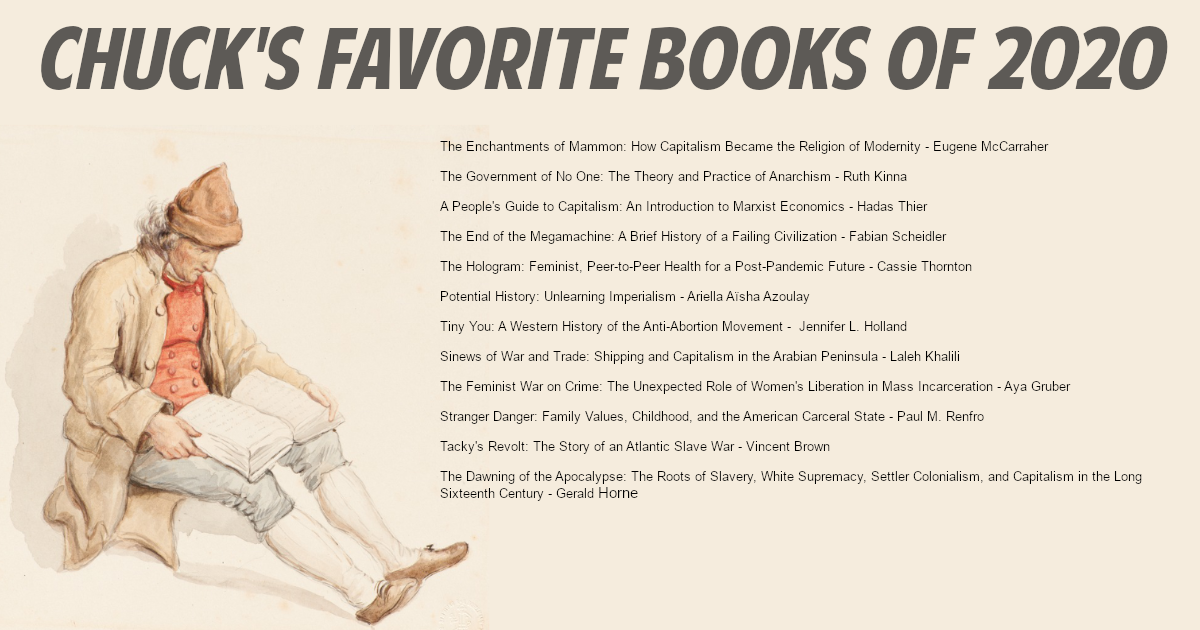 The Enchantments of Mammon: How Capitalism Became the Religion of Modernity

The Government of No One: The Theory and Practice of Anarchism

A People's Guide to Capitalism: An Introduction to Marxist Economics

The End of the Megamachine: A Brief History of a Failing Civilization

The Hologram: Feminist, Peer-to-Peer Health for a Post-Pandemic Future

Tiny You: A Western History of the Anti-Abortion Movement

Sinews of War and Trade: Shipping and Capitalism in the Arabian Peninsula

The Feminist War on Crime: The Unexpected Role of Women's Liberation in Mass Incarceration

Tacky's Revolt: The Story of an Atlantic Slave War

The Dawning of the Apocalypse: The Roots of Slavery, White Supremacy, Settler Colonialism, and Capitalism in the Long Sixteenth Century

Moment of Truth: Must Be the Season of the Wish.

Welcome to the year-end Moment of Truth: the thirst that is the drink.

Caveat Ω: The following is satire, or, at worst, a joke. It is neither an earnest account, nor a call to action, nor should it be taken as an excuse for any authorities or their paramilitary proxies to molest or prosecute the writer and/or his, her, or their confederates.

Can the dead return to life? I know this is more of an Easter question than a Christmas question, but I have to ask because I plan on killing numerous people during and/or slightly prior to the upcoming Revolution, or war for independence from capitalism, and I want to be sure they can’t seek me out from some vantage point in the world of the dead – a mountaintop, or a ziggurat, perhaps – and thus locate me here in the living world, pierce the numinous veil, inhabit some corporeal structure of flesh, bone, and tendon, and do me an injury in payback. It really would spoil my plans, or at least disrupt them terribly.

My plan – and this is just between us – is to commit a few well-chosen assassinations first, either in the first few weeks of the war, or in the weeks leading up to it. This latter option is more difficult to plan for, but if everything we did in following our bliss were easy, it wouldn’t be bliss, would it?

And this particular segment of the plan is not such a worry. No one’s ever gone wrong committing an assassination. I mean, there are the celebrated disasters we’re familiar with from the lurid press – the Kennedys, Lincoln, Caesar, McKinley, King, John Lennon, Archduke Franz Ferdinand and such – but those are the sensational, tentpole assassinations, the splashy affairs.

Your run-of-the-mill assassination is just too run-of-the-mill for the tabloids (and they’re all tabloids these days) to bother with. The Russians, USA, and Israelis get away with them all the time. Israel just did one in Iran a couple weeks ago; Putin just denied an attempted one ten hours ago, and no one even got their hair mussed in consequence. I can hardly imagine anyone but an aggrieved bureaucrat even giving their desk so much as an angry fist-pound. And I think I can muster enough proof of Jewishness to qualify for Israeli citizenship –... read more

The past and future of epidemics / Frank Snowden