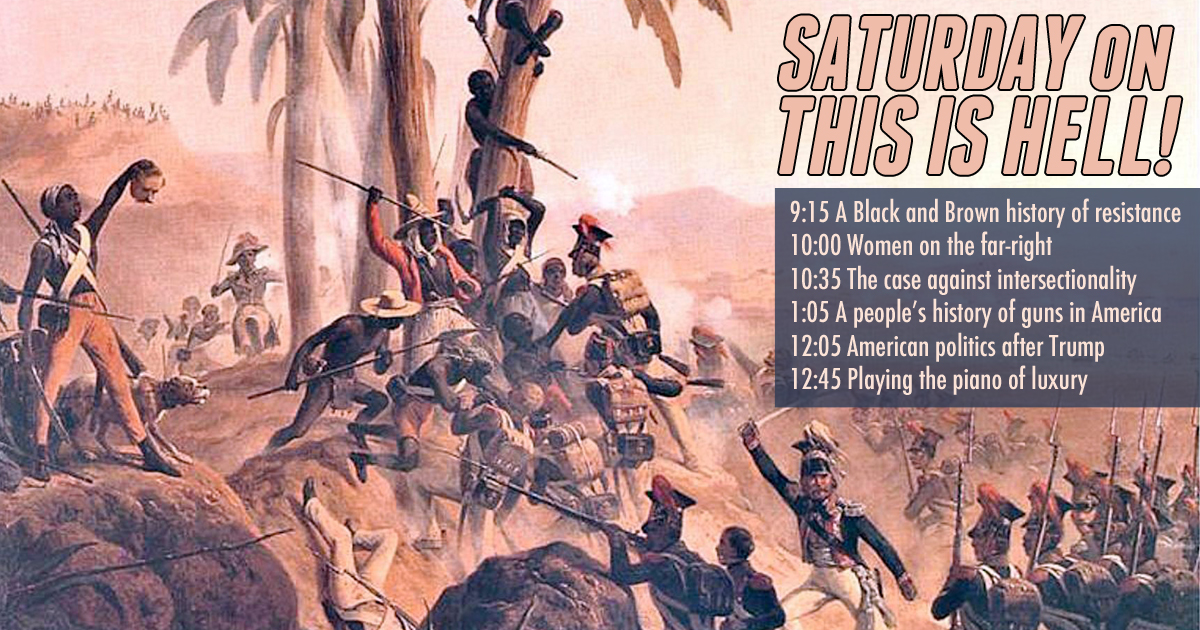 9:15 - Historian Paul Ortiz explores a Black and Brown history of organization and resistance against imperialism.

Paul is author of An African American and Latinx History of the United States from Beacon Press.

10:00 - Investigative journalist Lara Whyte examines the presence and participation of women in the far-right.

Lara co-wrote the article Why are women joining far-right movements, and why are we so surprised? with Claire Provost for openDemocracy.

11:05 - Historian Roxanne Dunbar-Ortiz views America's history of guns, from the other side of the barrel.

Roxanne is author of Loaded: A Disarming History of the Second Amendment from City Lights Books.

David is author of It's Even Worse Than You Think: What the Trump Administration Is Doing to America from Simon & Schuster.

What is justice? Isn't wishing for justice these days like buying a tomato in January? Why do it? What makes you think such a thing is possible? A January tomato? Maybe if you're living in Chile. But you're not, are you? Or maybe you are. But for my purposes today, let's say you're in the Northern Hemisphere, where we might ask the question, is it just for us to receive produce from lands thousands of miles away so we can have unpleasant winter tomatoes?

Answer? Not sure. There are many schools of thought on justice. Is it fairness? Is it just a word, like pennywhistle? Is it a flavor of living, like a little cheerfulness in your day, or a little cucumber in your water? Is it a parabolic, infinitely unreachable limit?

Is justice an ideal, unrealizable? Is it a dream? I'll tell you what, a fine fresh tomato in January is a dream, a dream that will never come true. So if justice is a January tomato, there's your answer. Justice is a little bit grayer than you want it to be, a little bit harder, a lot less delicious.

To everything there is a season. Justice, tomatoes. Stone fruits. Basketball. And when is it justice season here in the United States?

Some might say Justice Season arrived with the #metoo movement. Let's see what that justice is made of. A man in a position of power, formal or informal power, uses that power to force women or even girls against their wills to participate in or observe his sexual gratification. Years later, after having been ignored or gaslit or victim-blamed by the institutions empowering the male abuser, finally these women are listened to and their abusers brought face-to-face with consequences. That's justice.

Or is it too little too late? Or is it both: too little justice too late, but justice nevertheless? I think of the Innocence Project. I think of a man, usually black, who has been sitting on Death Row for most of his life – say, thirty-five years – for a crime he didn't commit. Let's just say for the sake of argument that he never committed a single crime. He was simply framed by the police and the prosecutor. But now, due to the discovery of formerly suppressed exculpatory evidence, he's finally free! Justice has triumphed!

But what if he'd never been railroaded? What if he'd been arrested and, at trial, had been found innocent and set free, never having... read more

Here's what Chuck is reading for Saturday's show:

Why are women joining far-right movements, and why are we so surprised? - Lara Whyte and Claire Provost

It's Even Worse Than You Think: What the Trump Administration Is Doing to America - David Cay Johnston | Simon & Schuster

And here's what we read this week just for fun:

‘One thinge that ouerthroweth all that were graunted before’: On Being Presidential - China Mieville | Salvage

Bombs in Our Backyard - | ProPublica

Lipstick on a Gig: Why We Should Be Very Skeptical of Uber’s New “Portable Benefits” Scheme - Julianne Tveten | In These Times 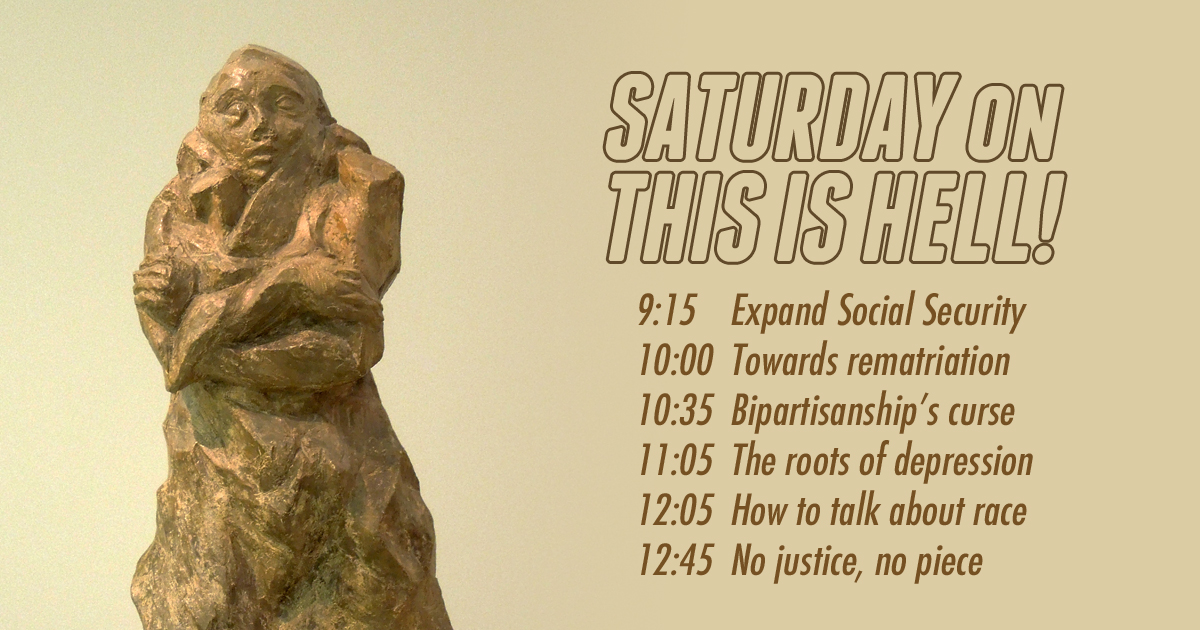 9:15 - Journalist Doug Henwood works out a solution to the pension crisis, far from Wall Street's grasp.

Doug and Liza Featherstone wrote the report Wall Street Isn’t the Answer to the Pension Crisis. Expanding Social Security Is. for In These Times.

10:00 - Journalist Sarah Sunshine Manning discusses the politics of indigenous feminism and the promise of rematriation.

Sarah wrote the article No Indigenous Women, No Women's Movement for Truthdig.

Luke wrote the article The Curse of Bipartisanship for Current Affairs.

11:05 - Writer Johann Hari explains why disconnection is at the center of depression and anxiety today.

Johann is author of the book Lost Connections: Uncovering the Real Causes of Depression – and the Unexpected Solutions from Bloomsbury.

12:05 - Writer Ijeoma Oluo talks about what we need to talk about when we talk about race in America.

Ijeoma is author of the book So You Want to Talk about Race from Seal Press.

12:45 - In a Moment of Truth, Jeff Dorchen wonders why we even bother thinking about justice.

He'll probably come up with an an

Moment of Truth: The Thank You For Your Service Economy

People are wondering, okay, what's next? After the current order destroys itself, what fresh horror will emerge? Now that the contradictions of democracy perverted by capitalism have revealed themselves, after the snake eats its tail, and chews all the way up into its own heart, what misshapen, radiation-mutated phoenix will rise from its ashes?

Recent think pieces have bemoaned the failure of the left. Rightly so. Quite rightly. The diagnosis is a lack of Leninism in the blood. Leninism is nostalgically pined for both for its leadership and its roots in the laboring class.

The reason for the left's suspicion of a Leninist vanguard party is clear enough, with China and the former Soviet Empire providing spectacular examples of the pitfalls of allowing anti-democratic, authoritarian regimes to dominate the fight, even the rhetorical fight, for economic justice. Even before Stalin, on whose shoulders most of the historical burden of Soviet totalitarianism is heaped, Lenin's treatment of soviets daring to assert autonomy, and the prematurely Orwellian impulses evinced by the Bolshevik party, were enough to give Emma Goldman pause. No romanticism of the professional revolutionaries of the early 20th Century is going to wash away the gray flavor of oppressive social engineering and attempts to stamp out bourgeois, culturally and sexually exploratory, and religious values from above. In the USA, the fear the left has maintained of despotic rule is the Jeffersonian one giving the Constitution its suspicion of concentrating power in any one of the three branches of government. Unfortunately, the framers were notoriously lacking in sufficient suspicion of capital, but that's our burden now, isn't it?

Then there's the other question of what the left misses of Lenin's charms: why has the left become so isolated from labor? Everyone on the left I know who has tried to return to their ideological roots in the working class has maintained some distance from wage slavery. I've known progressives that turned to organic farming. Many, of course, become teachers. I know middle-class people, or those who assume they're middle-class, who have eschewed the class-enemy status of what we call "the professions" for something more like trades: furniture makers, chefs, bicycle mechanics, nurses, journalists, barbers, electricians. Contractors of various types. People who work... read more 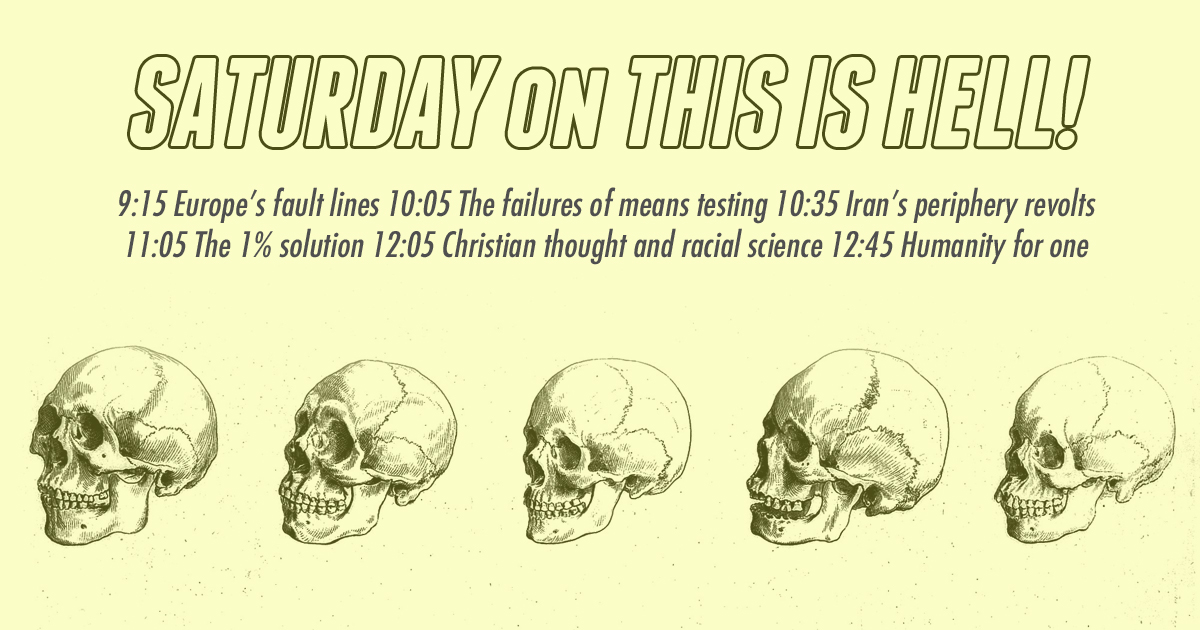 9:15 - Author Liz Fekete sees the far right not fighting against the European state, but working within it.

Liz is author of Europe’s Fault Lines: Racism and the Rise of the Right from Verso.

10:35 - The Radical Pessimist, Kevan Harris examines the labor roots of Iran's revolt of the periphery.

Gordon is author of The One Percent Solution: How Corporations Are Remaking America One State at a Time from Cornell University Press.

12:45 - In a Moment of Truth, Jeff Dorchen envisions the future for humanity that will suit him.

Jeff's movie comes out next month. He wrote it!

Moment of Truth: The Unseen Country

Jeff Dorchen is damp. Not even sure how to go about carving into this nonsense. Shirthole countries. Did you hear about Donald Dump's complaint about shirthole countries? The racism, the colonial, imperial, capitalist disdain and hatred. He really needs to find his fat face at the end of a swinging baseball bat. He needs a dentist, a dentist who uses only baseball bats. That's the fever talking. Delirium. And with the heartburn. For days I've eaten nothing but a few select oddities. A dozen roasted potatoes. A plain bagel. A cookie. A pizza. Plain green beans. A pear. Chicken soup. Blueberry pancakes. Ginger beer. A varied diet, but somehow it hasn't nourished me.

The temperature changes radically, moment to moment. The pillow is hot, the air is cold, the blankets are hot, the sheets are cold. The head is thick and full of fuzz. In the parking garage of Trader Joe's, where I'd gone to get ginger beer, a customer was doing a noisy but conscientious job of collecting errant shopping carts and bringing them to the cart corral. I passed her just as she completed her task. "Damn," I said, "You really earned that free parking!"

Shirthole countries! Y'know, I'm in no condition to pick apart this event, but I don't know if there'll be a future. Dump. A sizable amount of people on Earth considered him the worst sort of human being, decades ago. I don't believe he's won any converts since then, he's just fattened up the ones he already had. It's just not nice, that's what it isn't. For a president to say about people's homes. Shirtholes.