Moment of Truth: The Cereal Is The Message

I want to correct the common misconception that we don't have seasons here in LA. False. We have rain season, fire season, allergy season, and pilot season.

I like lists. I like labels. I love to hate-read commercial copy. I've been an avid reader of cereal boxes since I was a wee lad. The cereal box is a rare example these days of literature that is far more commonly read on hard copy than in digital format.

Food labels are deceptively misinformative. They tell you the selective nutritional content of the grub in the container. They give a somewhat fanciful list of ingredients. (I collect synonyms for "sugar.") Labels can even more fancifully describe the essential nature of the food: is it "all natural?" Is it "organic?" You never see food announcing that it's "partially synthetic," "now less delicious," "sprinkled with insect parts," or "made from repurposed latex detritus and shaved lead." We don't look for truths on our food packaging.

Where do we find truths in hard copy? Books! Ever read one of these rustic bastards? They're made of paper and other old-fashioned materials, such as string and glue, cloth, and sometimes leather.

Some books contain hard truths, some easy ones, and some no truths at all, but only lies. Cowboys and seafaring people used to read them, that's how ancient books are.

I'm reading one currently! There are a couple of tricks to it. First, you have to find a comfortable position in which to hold the equipment and gaze at it for minutes at a time. Secondly, you have to open the thing, and hold it open, either on a lectern, or using your human hands, feet, face, or a heavy object such as a brick or a rock. Even another book will do. Even a cereal bowl. The paper and ink inside reveal the thoughts of the person or persons who composed or compiled the contents. It sounds a lot more complicated than it is, and that's one of the few things you can say that about.

Books are also unusual in that they begin in one place and end in another, unlike a Mobius strip, or the universe. In this way books mimic journeys. And, like a journey, they can be bad for your health. You can lose things on the way. Books can cause brain... read more 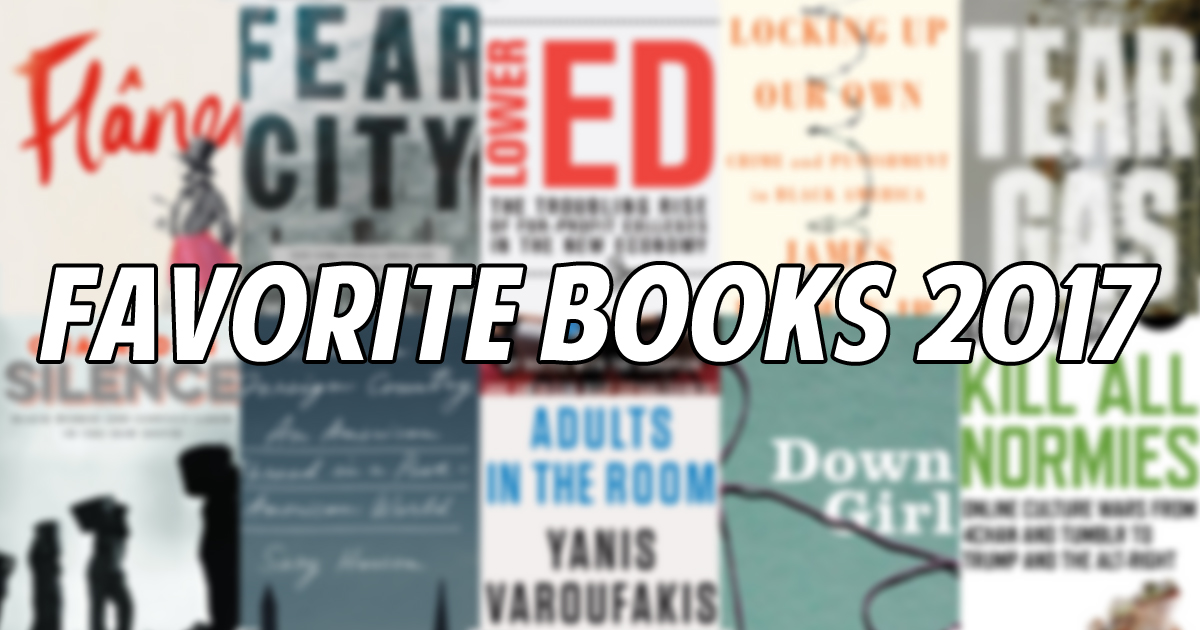 Chuck picks his 10 favorite books from the 100+ he read for the show this year:

Locking Up Our Own: Crime and Punishment in Black America

Tear Gas: From the Battlefields of WWI to the Streets of Today.

Notes on a Foreign Country: An American Abroad in a Post-American World

Chained in Silence: Black Women and Convict Labor in the New South

Down Girl: The Logic of Misogyny

Lower Ed: The Troubling Rise of For-Profit Colleges in the New Economy

Kill All Normies: The online culture wars from Tumblr and 4chan to the alt-right and Trump

Adults in the Room: My Battle with the European and American Deep Establishment. 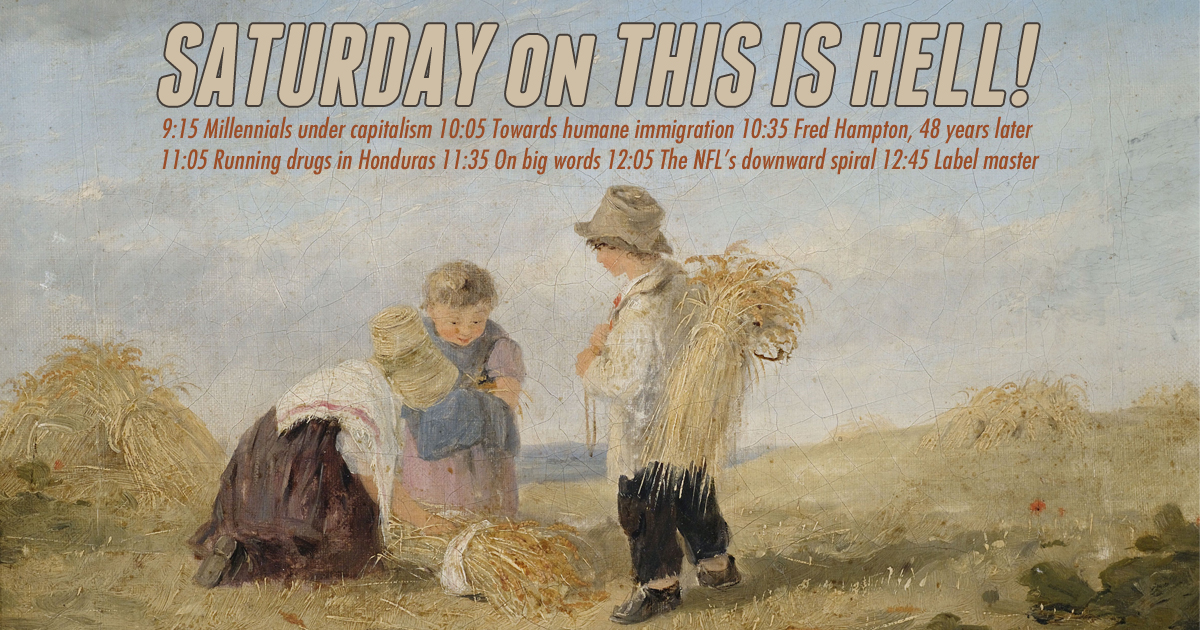 Malcolm is author of Kids These Days: Human Capital and the Making of Millennials from Little, Brown and Company.

11:05 - Journalist Jake Johnston reports on a drug running scheme in the Honduran coup-government.

Jake wrote the article Top U.S.-Backed Honduran Security Minister Is Running Drugs, According to Court Testimony for The Intercept.

12:05 - Writer David Roth explores the imperial rot deep in the heart of the NFL's ownership class.

David wrote the article Downward Spiral: A fan’s notes on the decline of the NFL for The Baffler.

12:45 - In a Moment of Truth, Jeff Dorchen reveals the truth behind food labels and the Vietnam War.

Not sure if it's the same truth there, or like different truths for each discrete entity. I'll find out the same time you do.

In a dreamlike if not nightmarish image, a Croatian war criminal, during his sentencing at The Hague, killed himself by drinking a little bottle of poison. The US Senate passed a tax "deform" bill designed to injure if not destroy a majority of citizens while giving a tax break to private jet owners. And to twist the blade in our angst, President Hemorrhoid Hoover tweeted a trilogy of the British right wing's Islamophobic version of The Protocols of the Elders of Zion.

Each day brings a new travesty. That's the hallmark of the Donald Dump era. There are certainly more important issues to focus on than the daily atrocity he commits against logic and language. But it's all right, sometimes, to examine the daily dung and our consequent feelings of disgust. It can be instructive. It can even bring us together. As a people. A people disgusted.

I don't always wake up late, but even when I mistakenly wake up early, it takes me a while to catch up with the rest of you. Depression and apathy, aggravated by the itchy burning of President Hemorrhoid, weighs me down. Upon waking, I find that my head is encased in a gelatinous cube of despair. On the very rare mornings I start perusing social media especially early, at, say, 5 am, nothing actually registers for the first few hours. I'm like a mature sunflower, head in the shadows, seeds falling out of my heavy face, absorbing nothing. Well, maybe not seeds falling out of my face. Unless they're seeds of incomprehension. But incomprehension isn't a seed-bearing plant. It's a legume. And why out of my face? Why "out" at all?

Leave me alone, it's early.

Living in the Pacific time zone, I get going, if you can call it "going," three hours later than the folks on the East Coast, so they're even farther ahead of me than my fellow Pacific Rimmers. Simply put, in the continental USA, I'm not going to be catching any early worms. By the time I finally come out of the fog and realize I'm on Twitter or Facebook, every news item is long buried under several layers of mockery, parody, and meme-age. But I've become pretty good at digging through the bemusement and bile of others to the inciting incident.

I'm concerned that white people didn't quite get what happened when the Navajo Code Talkers visited Resident Dump in the White Witch Satanic Christmas House. Not that the situation had been parodied to death, but it had... read more 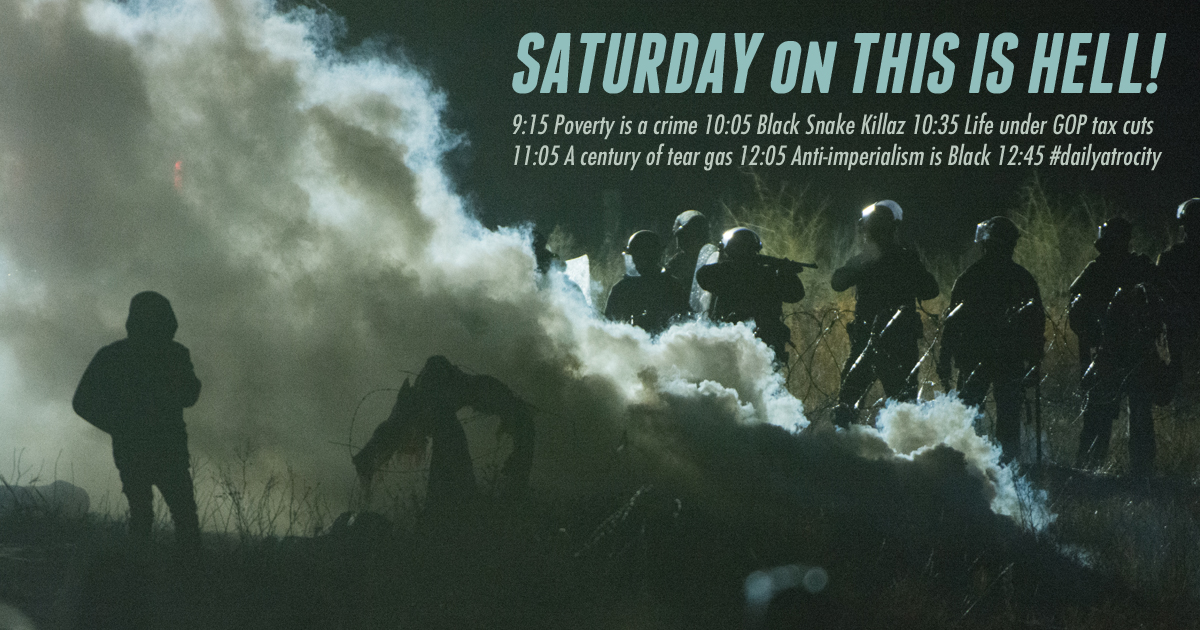 Peter is author of Not a Crime to Be Poor: The Criminalization of Poverty in America from The New Press.

10:05 - Journalist Niko Georgiades profiles the water protectors on the front lines of the #NoDAPL fight.

Anna is author of Tear Gas: From the Battlefields of WWI to the Streets of Today from Verso Books.

12:05 - Historian Paul Ortiz connects the politics of anti-imperialism to the tradition of Black radicalism.

Paul wrote the essay "Anti-Imperialism as a Way of Life: Emancipatory Internationalism and the Black Radical Tradition in the Americas" in the collection Futures of Black Radicalism from Verso.

12:45 - In a Moment of Truth, Jeff Dorchen logs on and dissects the daily Twitter atrocity.

If you have to @ someone about this, please @jdorchen.

Moment of Truth: Our Deformed Economy

Nietzsche called those with flaws that got them into positions of control over resources at the expense of others, "the strong." Everyone under their control he called "the weak." He called the rhetorical idea that such control was immoral, "slave morality," a trick the weak played to gain leverage over the strong. Pretty clever of the weak, he allowed.

Nietzsche was brilliant and funny and tragic, but his opinions about strength and weakness miss the point of economy. An economy seeks to provide for needs and to channel abilities. That's what it's always been, I argue, in my new essay. This one. I'm defining economy as an emergent behavior of a social group, not as some top-down design. The chief of a tribe didn't design their economy. Kings didn't design their economies. Prefects and mayors don't design their economies. They do all use their positions in the social hierarchy to influence the rules of the economy in their favor. The communist governments of Russia and China attempted in the most obnoxious way to force top-down design, which led to deprivation, cruelty, and crime.

To this day, economies are deformed by the coercing, twisting, bending, torqueing tendencies of elites to try to enrich themselves, and, under capitalism, those elites are not solely governmental. Not by a long shot, chump. Private corporations and financial organizations are able to deform the goals of the economy just as easily if not more so, sometimes using government and sometimes ignoring... read more 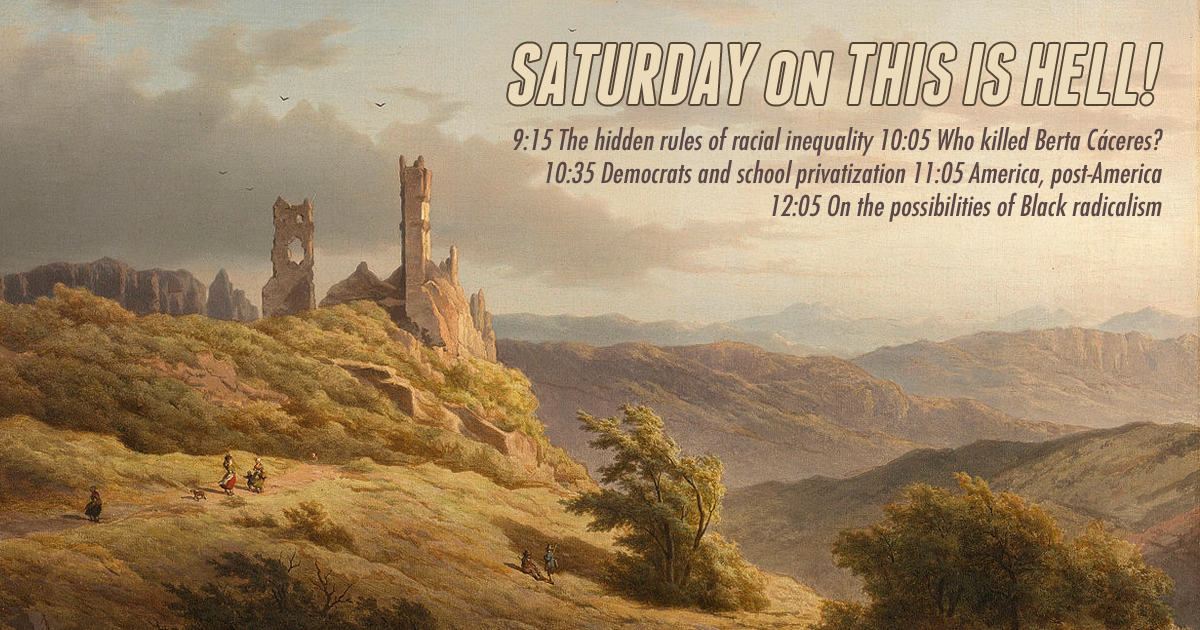 Andrea is author of the book The Hidden Rules of Race: Barriers to an Inclusive Economy from Cambridge University Press.

10:05 - Journalist Silvio Carrillo reports on new evidence around the assassination of Berta Cáceres.

11:05 - Journalist Suzy Hansen examines America's era of decline, from outside its borders.

Suzy is author of Notes on a Foreign Country: An American Abroad in a Post-American World from Farrar, Straus and Giroux.