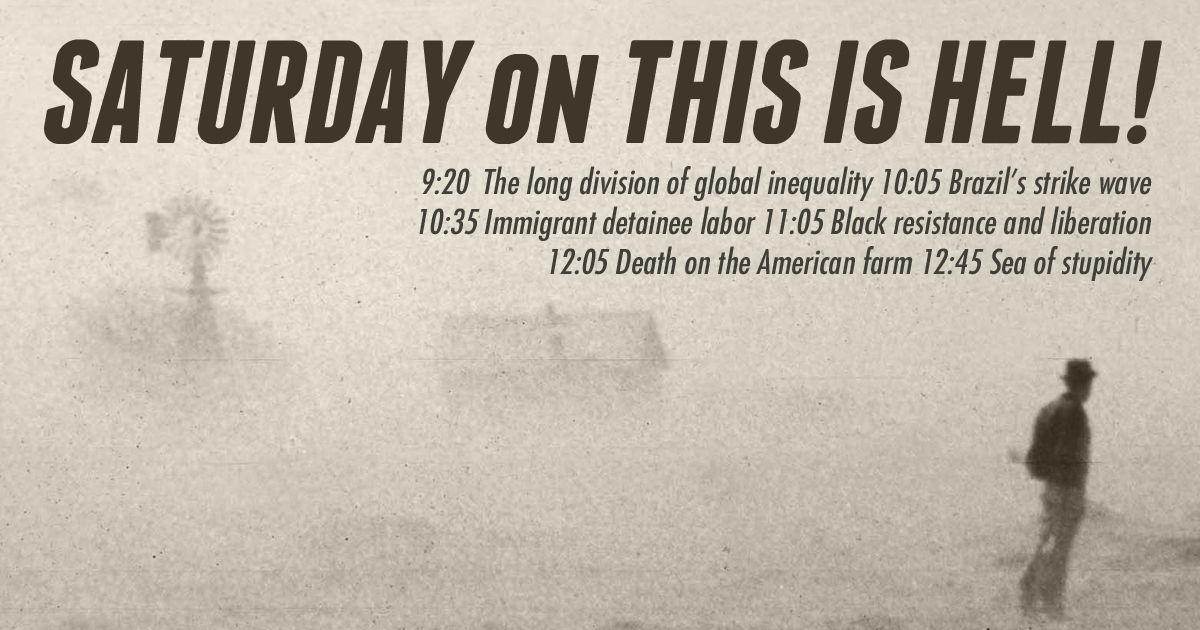 Jason is author of The Divide: Global Inequality from Conquest to Free Markets from Norton Books.

Victoria wrote the feature Investigation: Corporations Are Profiting From Immigrant Detainees’ Labor. Some Say It’s Slavery. for In These Times.

Zoé and William are authors of As Black As Resistance: Finding the Conditions for Liberation from AK Press.

Kathryn wrote the article Traumas of Dispossesion for Jacobin.

People come up with a variety of strategies to deal with the frustration. Some have sex with flashlights, some entice members of other species, some mope and wallow with the same enthusiasm which might propel others into non-sexual or subliminally sexual or quasi-sexual activities such as mixed martial arts or papier- mache crafts or arson. But to some, nothing can take the place of having sex, even if they've never had it before.

Certain young men refuse to have sex with anyone but beautiful young women, to use their phrase. Well, it is best to have sex with someone you're sexually attracted to. But beautiful young women are a small part of the population. I mean, it depends on your definition of beautiful, I guess. But these young men seem to mean women who fit a particularly rigid definition of commercial hetero-normative female attractiveness. Being rigid during sex works, but being rigid about who you'll have sex with is a recipe for dissatisfaction. There are so many kinds of bodies and minds. But I'm probably preaching to the converted here.

Incels, or "involuntary celibates," are a group of men in their early twenties and perhaps older who blame their celibacy on rejection by the women they feel should rightfully be theirs to do with as they please. They want to go back to an imaginary time when they believe beautiful women had no choice but to pair with men like them. I'm not sure who these guys think they are that they would meet the criteria for mating in the situation they've convinced themselves once existed. They blame feminism and multiculturalism for ruining the good thing they would have had if only they'd been born in an imaginary past when women were so dependent that they would sign up to sleep with just about any white man for their entire lives just because that's what was done. These heterosexual males believe that, if they had a time machine, they could go back to a society in which they wouldn't be lonely and sexually frustrated, because women's opportunities for happiness... read more

On This Day in Rotten History: May 26th

In 1637 – (381 years ago) — more than a hundred English Puritan colonists were joined by some two hundred indigenous Mohegan, Narragansett, and Niantic warriors in an attack on a fortified Pequot village near the Mystic River in what is now southeastern Connecticut. The Mohegans, in particular, had once been in a single tribe with the Pequots before the two groups split over tensions regarding trade with English and Dutch settlers. But now the Mohegans were allied with the English, who had their own territorial and trade ambitions and had been at war with the Pequots for almost a year. In an early morning raid led by two English captains, the combined forces surrounded the Pequot village, breached its wooden palisade, and forced their way in. The Pequot defenders quickly fought them off, so the English responded by setting the whole village on fire, blocking its two exits, and shooting anyone who tried to come out. Within a half hour, some four hundred to five hundred men, women, and children were horribly burned to death. The few villagers who managed to escape were quickly hunted down and shot. After another year of war with the settlers, the Pequot would effectively cease to exist as a tribe, and the stage was set for further colonial expansion in New England. 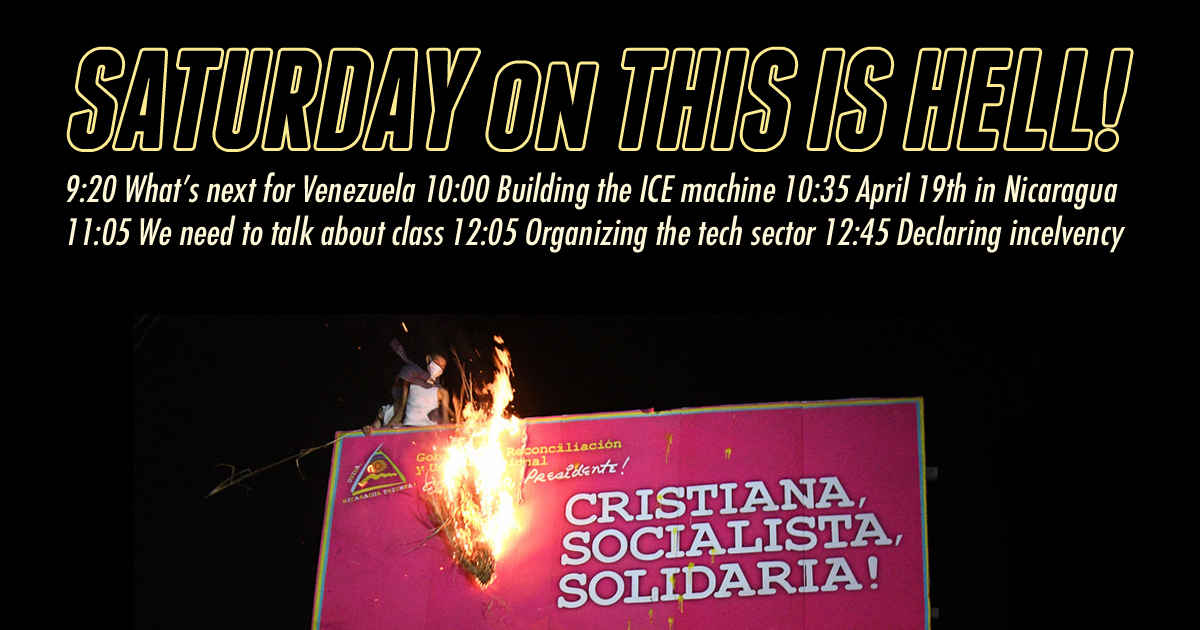 Listen live from 9AM - 11:45AM Central on WNUR 89.3FM / stream at www.thisishell.com / subscribe to the podcast

9:20 - Writer Jorge Martin examines the two futures of Venezuela and the Bolivarian revolution.

10:00 - Journalist Tina Vasquez explores the brutal architecture of ICE in the Trump era.

Tina wrote the article The New ICE Age: An Agency Unleashed for Rewire and the New York Review of Books.

Courtney wrote the article Unexpected Uprising: The Crisis of Democracy in Nicaragua for NACLA.

Steve is author of Class Matters: The Strange Career of an American Delusion from Yale University Press.

12:45 - In a Moment of Truth, Jeff Dorchen mansplains the incel issue. 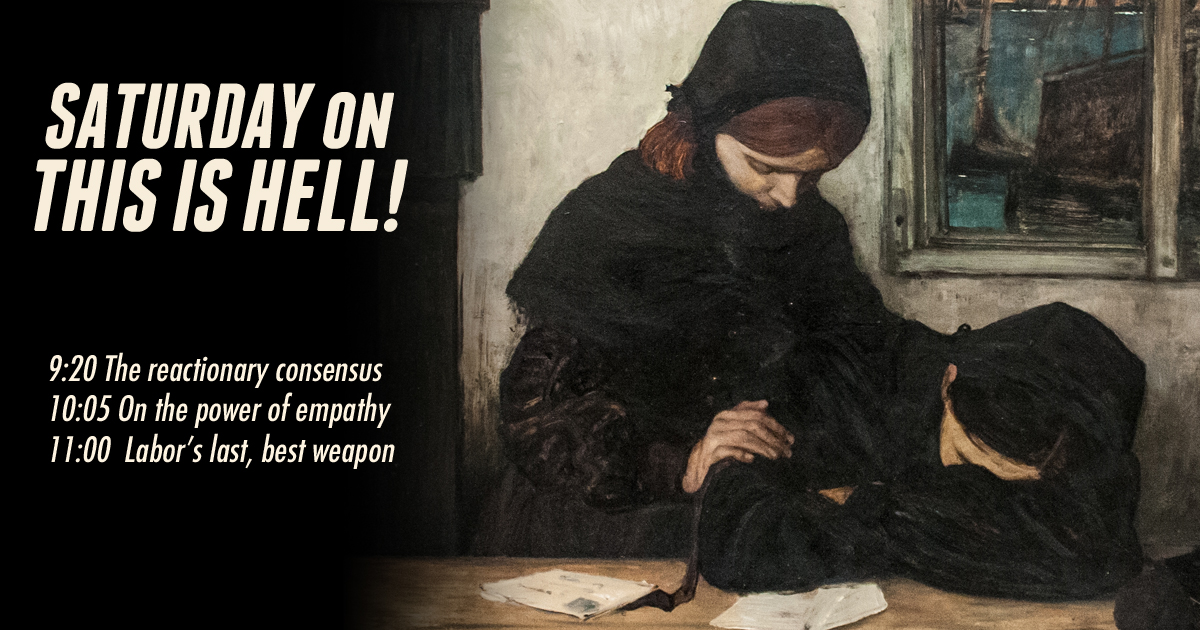 Listen live from 9AM - 11:45AM Central on WNUR 89.3FM / stream at www.thisishell.com / subscribe to the podcast

9:20 - Writer Nathan J. Robinson wonders if the loudest media people aren't the ones being silenced.

Nathan wrote the recent articles The Real “Dangerous” Ideas and Israel and the Passive Voice for Current Affairs.

Cris is author of I Feel You: The Surprising Power of Extreme Empathy from Houghton Mifflin Harcourt.

David is author of The Rise of the Working-Class Shareholder: Labor’s Last Best Weapon from Harvard University Press.

Moment of Truth: Rape and Rhetoric

Listen carefully: "Among the many atrocities Dr. Mengele perpetrated on his subjects were so-called experiments "requiring" the mutilation of his subjects' eyes. The kids loved it."

How do you know when something's plainly sincere and something's meant in some other way? In the first sentence, the words "atrocities" "perpetrated" "mutilation" and "Dr. Mengele" are tip-offs that what is being written of is not done so out of admiration. Those tip-offs are clues that the statement, "The kids loved it," is meant sarcastically, perhaps even sardonically. But if you don't read the tip-offs accurately, how do you know what's meant sincerely and what is not?

The writer relies on the reader's extra-textual associations with the tip-off words. Nazi doctors and the atrocities they perpetrated are by general consensus evil. There are, of course, some people who would argue with the presumption of consensus, but for the most part, any reader of the English language at a sixth grade level or beyond would understand the tone of the sentences, and would replicate that tone in their minds as they read. The reciter of such a pattern of tropes on the radio would be expected to provide vocal cues to aid the listener's interpretation.

Last week, more than one very intelligent person thought that I, in my Moment of Truth segment, was advocating for the rape of Bill Cosby in prison. I assure everyone that I mean this sincerely and emphatically: I do not advocate the rape of Bill Cosby or anyone else, either in prison or at any other location. And if that wasn't the problem, as one listener asserted, then perhaps it was just a repulsive essay. That I can't deny. But such an interpretation also calls into question my own reasons for presenting such a piece of repulsiveness. Did I choose the right tool for that job? And what was the job? If listeners are supposed to detect extra-textual clues, did I maybe convey a meaning that was beyond my conscious control? I wouldn't doubt it.

When I said, "It's going to be someone's job to rape Bill... read more 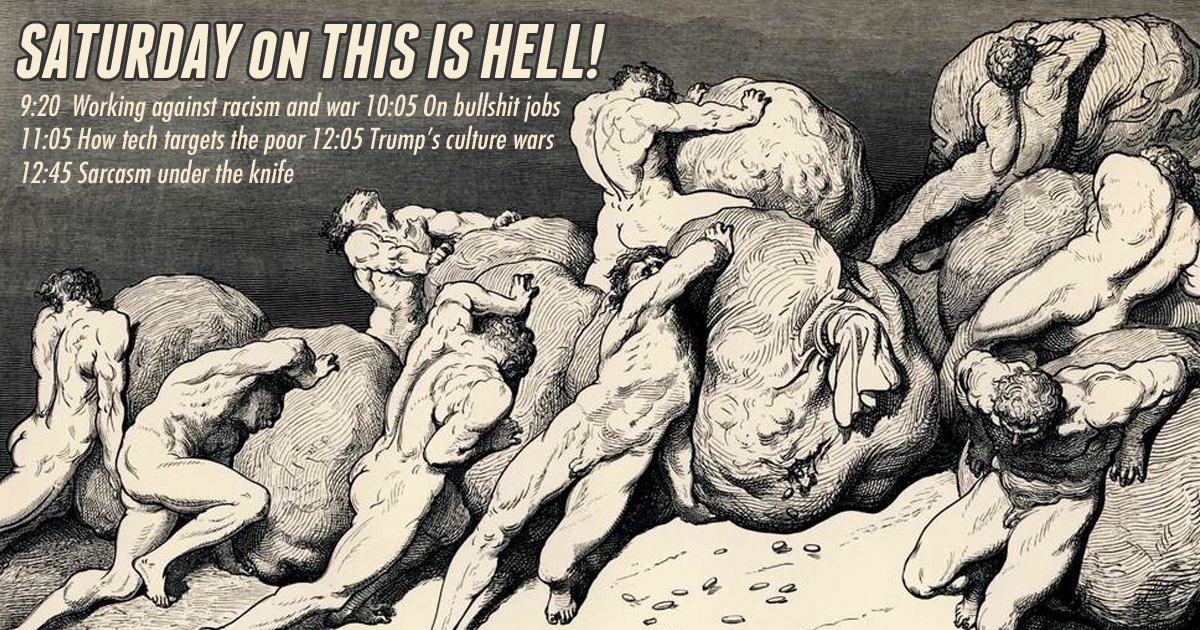 9:20 - Writer Kevin Ovenden calls for solidarity and cooperation between anti-racism and anti-war movements.

Kevin wrote the post The anti-racist radical left must give the ideological battle on his site. He's in Chicago giving talks on Saturday afternoon and Monday night.

10:05 - Anthropologist David Graeber explores the meaning and meaninglessness of our bullshit jobs.

David is author of the new book Bullshit Jobs: A Theory from Simon & Schuster.

Virginia is author of Automating Inequality: How High-Tech Tools Profile, Police, and Punish the Poor from St. Martin's Press.

Andrew wrote the article The Culture Wars are Dead: Long live the culture wars! for The Baffler.

12:45 - In a Moment of Truth, Jeff Dorchen sincerely dissects the corpse of sarcasm.