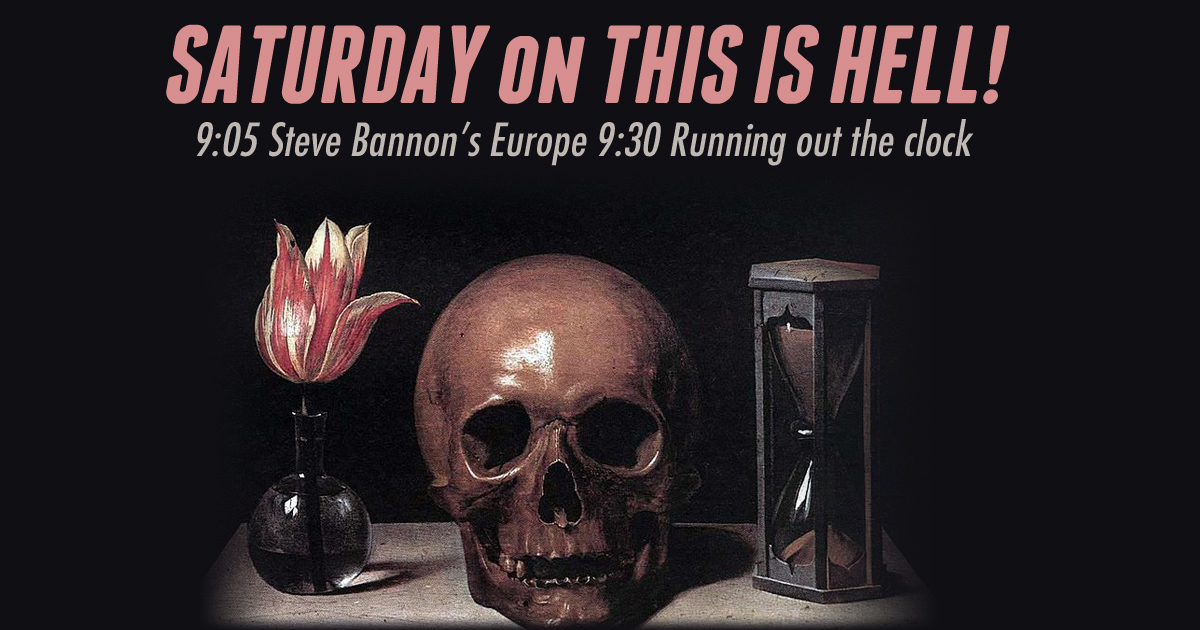 Eleanor wrote the article Steve Bannon’s European Dream for In These Times.

9:30 - Writer Aaron Timms watches the liberal order run out the clock on a world with little time left.

Aaron wrote the article This Is Not A Blip for The Baffler.

Moment of Truth: Boofing In The Devil's Triangle

Brett Kavanaugh is unfit to be the judge of an ugliest dog contest, let alone a justice of the Supreme Court. In the hours after his crackpot performance before his questioning by the Senate Judiciary Committee on Thursday, where he whined, hollered, spat, wept, and carped that he was the victim of a well-funded revenge conspiracy by the Clintons to destroy him and his family, I heard an NPR anchor say that he "came out swinging." He came out flailing. Flailing is different from swinging. By swinging, one might hit a target on purpose. Flailing is involuntary movement caused by panic and fury. While flailing, one will hit many unintended targets.

We all saw it. Those predisposed toward anger at the Dump regime under which we have been forced to live by a supposed safety valve in the electoral system, which it turns out only provides safety from punishment to wealthy criminals, we were already antagonistic to this over-privileged bigot, this Kavanaugh. Instead of disarming us with charm, or with his awkwardly sparse admission that sexual assault is, yes, a bad thing, he played the aggrieved victim. Women who have been through the consequences of reporting sexual assault already know what it means to be the victim of a massive conspiracy, a conspiracy entrenched in our culture for centuries. Kavanaugh's bitter rage at the thwarting of his entitlement only made him unsympathetic and, apparently, out of control of his faculties. Testerical.

Thursday morning, before Lindsey Graham and others attempted to pile on the Democrats by mimicking Kavanaugh's grotesque invocation, I was due to supply producer Alex with my tease for today's Moment of Truth. I could have supplied a tease that avoided commitment. I could've said, "Saturday, Jeffy scrapes grease off the skillet." That's pretty non-committal. Or I could have come at it obliquely, saying, "Saturday, Jeffy takes a close look at Kavanaugh's penis." Kind of just rude, without saying anything of substance. But what if it comes out tomorrow, I worried, after I've teased my tease, that Kavanaugh doesn't have a penis? That he lost it in nursery school? It wouldn't do to mention it. That's cruel, even if the guy is a sexual thug. And we're all assuming he is. Mostly because of his face. I mean, that guy's mug says entitled, cruel, misogynist sex criminal all over it.

Which isn't really fair of me. I mean, it... read more 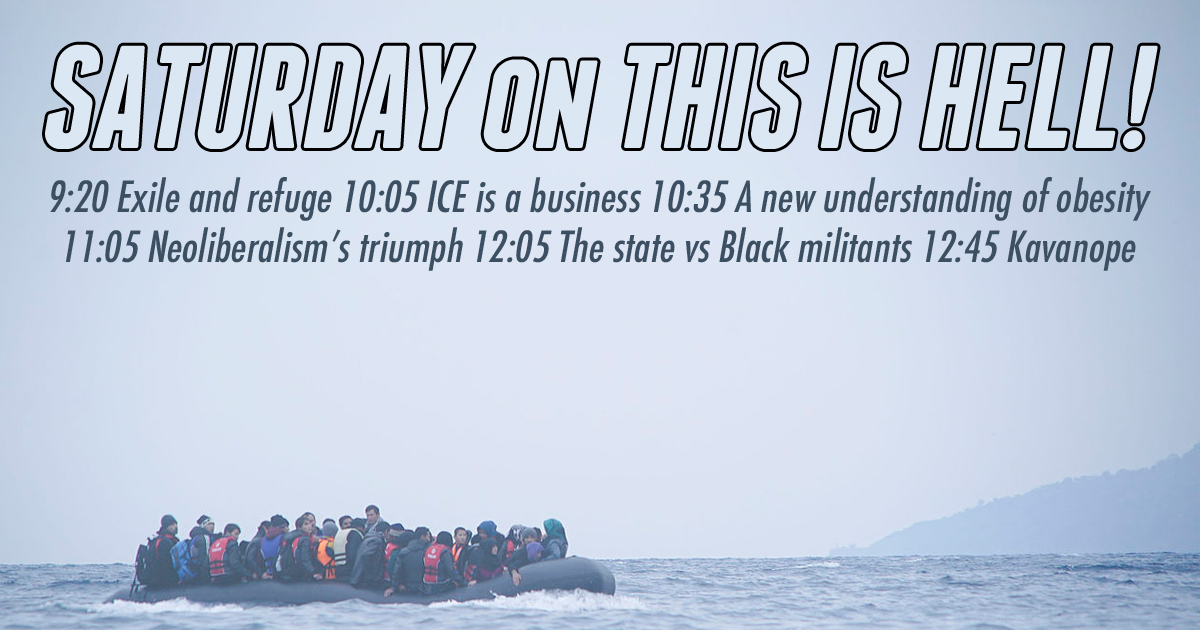 Daniel is author of Lights in the Distance: Exile and Refuge at the Borders of Europe from Verso.

David wrote the report Below the Surface of ICE: The Corporations Profiting From Immigrant Detention for In These Times

10:35 - Reporter Michael Hobbes explains what the health industry gets wrong about obesity.

Michael Hobbes wrote the article Everything You Know About Obesity Is Wrong for Huffington Post's Highline.

Adam is author of Neoliberalism's Demons: On the Political Theology of Late Capital from Stanford University Press.

Brittany is co-author of the article Solitary Confinement and the Nation of Islam for The Immanent Frame.

12:45 - In a Moment of Truth, Jeff Dorchen goes down the Kavanaugh hole.

Gross, however you read this.

Imagine a world with so many TV shows you didn't know what to watch, who was watching what, or when you'd ever have time to become somewhat culturally literate. Was that show about the dead people returning but not as flesh-eating zombies on last year or six years ago? And what about the one that was similar to that one, but you just couldn't get through episode four? If you were to begin watching it again, would Netflix remember where in the episode you left off? Sometimes it does that. What about that show about a murder in Sweden? Or was that the American version? Is Jessica Jones still relevant? Did they ever say how he met your mother? What about that show that was a montage of every ethnicity and sexuality engaged in a mental orgy across time and space because they were somehow related to Daryl Hannah? Or did I dream that?

Imagine a world with a century's worth of content packed into a decade and a half. Well, that world is this one we're in now. I think, unless I'm thinking of a TV show about a world like that.

Cultural touchstones are following each other so rapidly, they've created microgenerations. I can't even give examples because, although 50 is the new 30, culturally it's the new 130. I'm culturally a hundred fifty-five years old, and that's by conservative estimates. At least I'm young for a vampire.

The world of sitcoms would have ended for me with the era of "All in the Family," the world of comedians, the era of Richard Pryor, but even olds like Milton Berle and Jerry Lewis weren't entirely of the past. Later it was only by dating younger women that I learned to be conversant in the Powerpuff Girls, Missy Elliott, and Chris Rock. And then being briefly married to a middle-school teacher caught me up on Sean Paul, hot chips, and Dave Chappelle.
The young people these days are no help, though. They're even more at sea than their myriad strata of elders. A friend of mine in the movie and music industries said she'd overheard some millennials complaining about being unfamiliar with the artists at this year's Video Music Awards. My friend has a pretty panoramic eye on the popular arts, so she was astounded to hear that these kids had never heard of Ariana Grande, and whoever else the new crop of, I guess, post-millennials were up on.

Microgenerations. I came up with the brand, and I regret it, but the genie's out of the bottle. We're not... read more 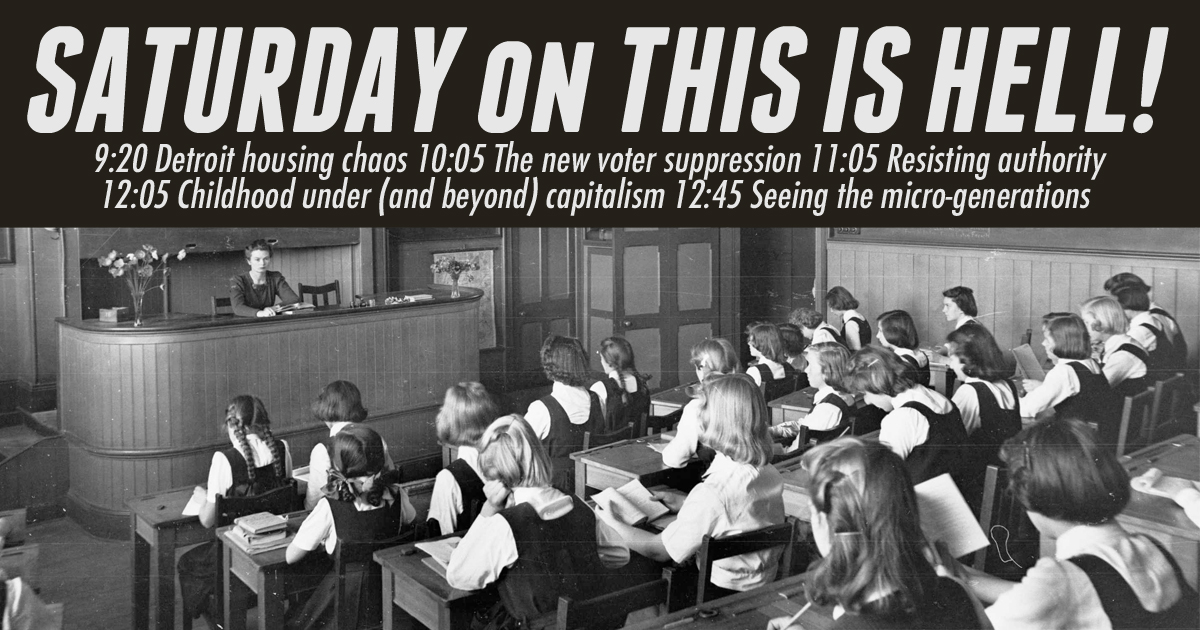 Carol is author of the book One Person, No Vote: How Voter Suppression Is Destroying Our Democracy from Bloomsbury.

Bruce is author of the book A Thinking Person’s Guide to Being an Anti-Authoritarian - Strategies, Tools, and Models from AK Press.

12:05 - Writer Megan Erickson looks at the realities of childhood beneath (and beyond) capitalism.

Megan wrote the article A Blueprint for Universal Childhood for Jacobin.

The Best of the 2008 Financial Crisis 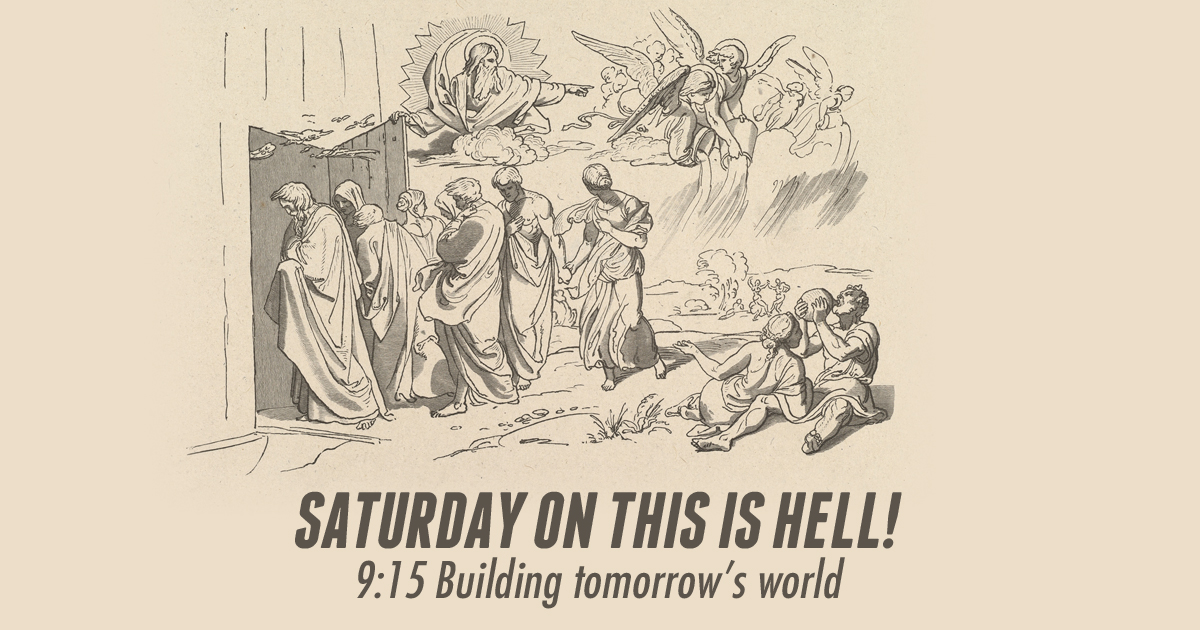 9:15AM - Biophysical economist Paavo Järvensivu explores the near future economics of a world in capital and climate crisis.

Paavo is co-author of the report Economic Transition Governance, a background document to a 2019 UN Global Sustainable Development Report.