The exchange you are making - for the air residents breathe, the water they drink, the effects on the rest of the economy, and all those sacrifices - which many people who live in the region and support the industry recognize as being sacrifices - you're just not getting a good enough deal to even remotely make that acceptable. And in fact, if you look at the numbers, you're getting no deal at all. Especially when it comes to jobs.

Researcher Sean O'Leary on the destabilizing impacts on a decade of shale gas fracking on the jobs, wages and population of 22 Ohio, Pennsylvania, and West Virginia counties, and the report Appalachia’s Natural Gas Counties: Contributing more to the U.S. economy and getting less in return for the Ohio Valley River Institute.

Moment of Truth: A Hundred and One Welbutrins.

A hundred and one Welbutrins. That's how many I have today. And here is why:

I get my depression meds from Canada. I order them as I need them. When one batch of 90 pills is three weeks from running out, which is three month's worth of pills, I order another batch. Sometimes I order the generics made in India. You get a hundred of those, whereas with the Canadian ones you only get 90. The problem with the Indian ones is that they come in foil blister packs, which is wasteful. But I forget that they come that way. If I remembered I wouldn't order the Indian generics. I don't like wasteful packaging.

Last time I placed my order, some events conspired to delay the delivery of my pills. The Canadian pharmacy called me to say that they no longer accepted payment by Visa card. The problem was, I'd missed the voicemail they'd sent me, and only stumbled upon it two days after they'd left it. Then it took a few days for me to figure out how to pay them by voided check sent by email, because the only card I have is a Visa debit card. The first person I talked to about it actually gave me the wrong information, and it sounded so wrong to me that I spent a couple days fretting over it in my mentally-ill fashion before calling back and straightening it out.

What I had attempted to do when I first ordered was give them plenty of time to send the pills before I left for Chicago for a week. Because I would need the pills in Chicago. I was going to be performing, and it was essential that I be in as fit a mental state as psychopharmacologically possible. What I had to do two weeks before leaving for Chicago, because of this delay created by their no longer taking payment by Visa and my missing the message and then my neurotic stalling over the situation, was to only take a pill every other day. The way older people cut their pills in half to save money, except instead halving the number of pills I took each day, I doubled the number of days per which I took each pill. I said "per which," yes. It's a grammatical figure I've just invented.

What happens when I stop taking Welbutrin is, first, I feel a weird sensation of squishiness when turning my head, as if my head were passing through a squishy volume of spacetime. As if spacetime were pudding, sandy pudding made of broadcast static, and the movie I'm in is missing a few frames that have been eaten by this static.... read more

On This Day in Rotten History: December 8

In 1915 – (103 years ago) — Arch and Cordella Stevenson, an African-American couple living in Columbus, Mississippi, were regarded by locals as respectable, hardworking people. But rumors were circulating that their son, who had a reputation as a troublemaker, had deliberately burned down a local white farmer’s barn several months earlier. Questioned just after the fire, Cordella Stevenson had told police that her son was out of town and that she had no idea where he was. Convinced of her honesty, the police had let her go, and dropped the case for lack of any evidence. But now, at ten in the evening, Cordella and her husband, Arch, were awakened by a loud knock on their door. Before they could answer it, a mob of angry, gun-wielding white people broke down the door and burst into their home. They grabbed Cordella and threatened to kill Arch, who somehow managed to escape and ran to get help. The next morning, Cordella Stevenson’s naked body was found hanging from a tree near a railway track, where it could be seen by horrified train passengers going in and out of town. It was left hanging there all day and through the night. Only on the following morning was it finally cut down and an inquest held, in which an all-white jury quickly ruled that Cordella Stevenson had been murdered by persons unknown.

In 1966 – (52 years ago) — The SS Heraklion, a Greek ferry, was sailing from the island of Crete to the port of Piraeus in high winds and rough seas, carrying some 270 passengers and crew along with a large load of cargo, including a refrigerator truck full of oranges. Evidently, the truck was poorly secured inside the ship’s cargo hold — and, as the ship pitched and rolled in the heavy waves, the truck repeatedly banged against a large loading door in the ship’s side. The door finally gave way, spilling the truck into the sea, and water rushed into the ship, causing it to capsize and sink in a few minutes. Hours went by before Greek, British, and US planes and ships arrived and were able to rescue thirty-seven passengers and sixteen crew. The other 217 people aboard the Heraklion all died. An inquiry later found the shipping company guilty of negligence, false documentation, and manslaughter. Twelve of the company’s other ships were pronounced unseaworthy, and its owner and general manager were both sent to prison. 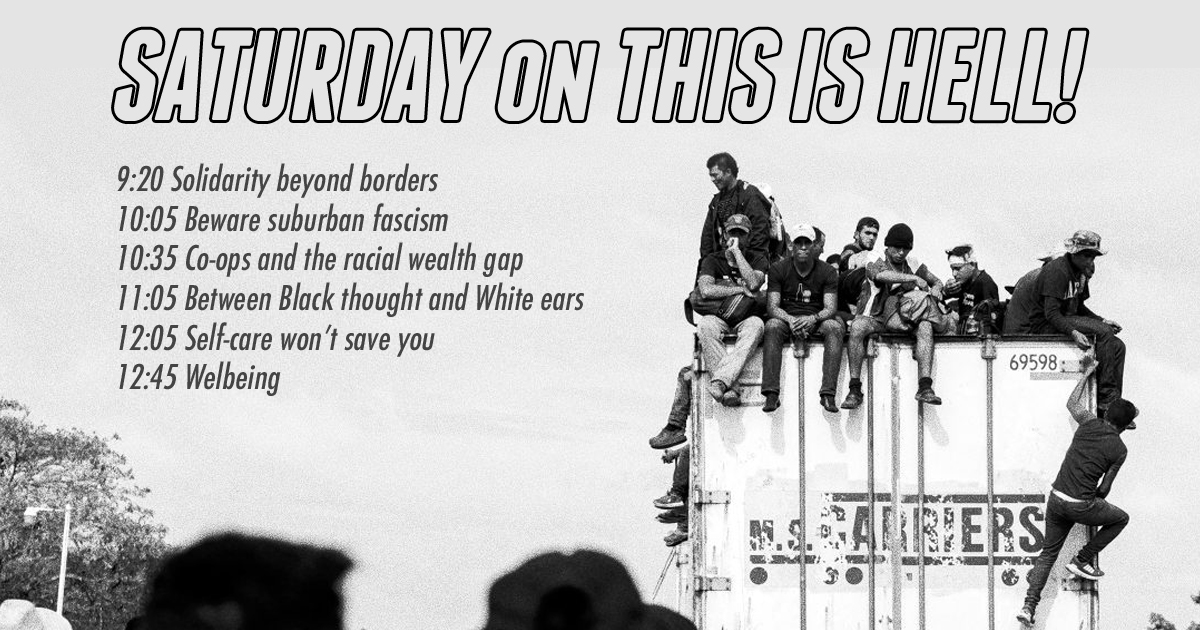 Martha wrote the article The Rebel Project of the Caravan: Solidarities and Setbacks for Viewpoint Magazine.

Mason is co-author of the article 'Dark municipalism' - the dangers of local politics for The Ecologist.

11:05 - Writer Mychal Denzel Smith explores the burden of presenting the Black experience to a White audience.

Mychal wrote the article The Gatekeepers: On the Burden of the Black Public Intellectual for Harper's.

12:05 - Writer Aisling McCrea argues with the internet about the merits of self-care and debate.

Aisling wrote the articles Self-Care Won't Save Us for Current Affairs and Resolved: Debate Is Stupid for The Outline.

12:45 - In a Moment of Truth, Jeff Dorchen spins the tale of A Hundred and One Welbutrins.

Moment of Truth: What Have We Become?

"What have we become?" I keep seeing people post this, in reaction to the shootings at the Chicago hospital and the Colorado thing, whatever it was, and the bar in Sherman Oaks. A school again? A movie theater again? A concert? A picnic? A church? A fish fry? We have not become anything new. The only change is who does what brutal, sickening thing to which innocent people, I regret to opine. How often, and how near. Maybe we've become less lucky. I sincerely do regret to opine thus. And I'm open to dissuasion.

Steven Pinker, who is a popular author, and a few other things, believes we're less violent these days. He believes we've made progress as a species. It's an opinion, and he defends it well, although very often, according to historians I've heard comment on his work, he deceives himself.

I know I don't have to convince any imbibers of This Is Hell that all that's really happened is a reshuffling and a miscounting. People lived as victims of brutal violence back in the Hellenic days, and they do now. People were slaves back in the reign of Hammurabi, and they still are today. Women and children and subjugated men were raped in China and Samarkand, at either end of the Silk Road, from its opening onward, and conditions are only cosmetically different in our own time. And that's not even to mention the animals. But "better to be an uptown dog than a downtown Jew" was a saying back in the rich and colorful days of the Lower East Side of Manhattan.

Why would things be any different? What would have caused this putative ebb of human cruelty? The Enlightenment? The internet? "I Love Lucy"? The Magna Carta? The Universal Declaration Of Human Rights? The Geneva Conventions? "Imagine" by John Lennon? The Statue of Liberty? Star Trek? What do we have more of now than before? Technology? Detergent? High fructose corn syrup? Pollution?

We try. We try so hard. We have ideals. We exalt the best of human nature, and castigate what is base. And you know what? It was ever so. There has never been a time when kindness wasn't considered a virtue. There was never a time when hypocrisy, betrayal, and malicious behavior weren't frowned upon. Even back in ignorant times, ignorance was a human foible. We've always known the right and good thing to do. 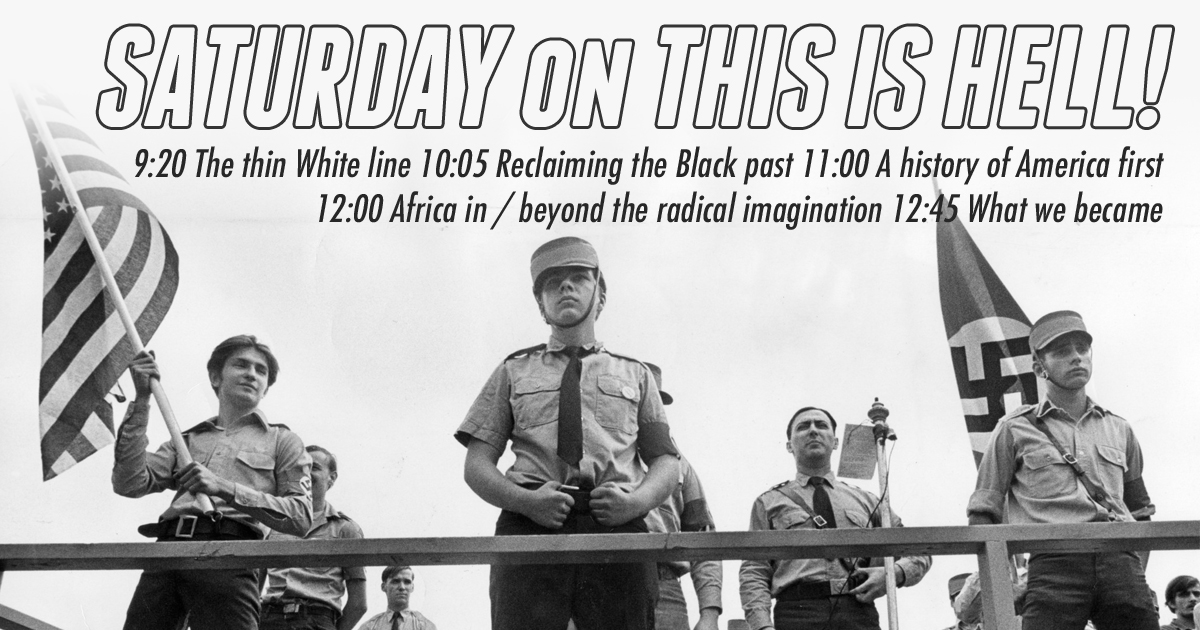 9:20 - Writer Natasha Lennard explains what the press misses between White supremacists and the police.

Natasha wrote the article Even the FBI Thinks Police Have Links to White Supremacists - but Don’t Tell the New York Times for the Intercept.

Pero is author of Reclaiming the Black Past: The Use and Misuse of African American History in the Twenty-First Century from Verso.

Sarah is author of Behold, America: The Entangled History of "America First" and "the American Dream" from Basic Books.

Zoe wrote the article Africa’s Place in the Radical Imagination for ROAR Magazine.

12:45 - In a Moment of Truth, Jeff Dorchen answers the question, What Have We Become? 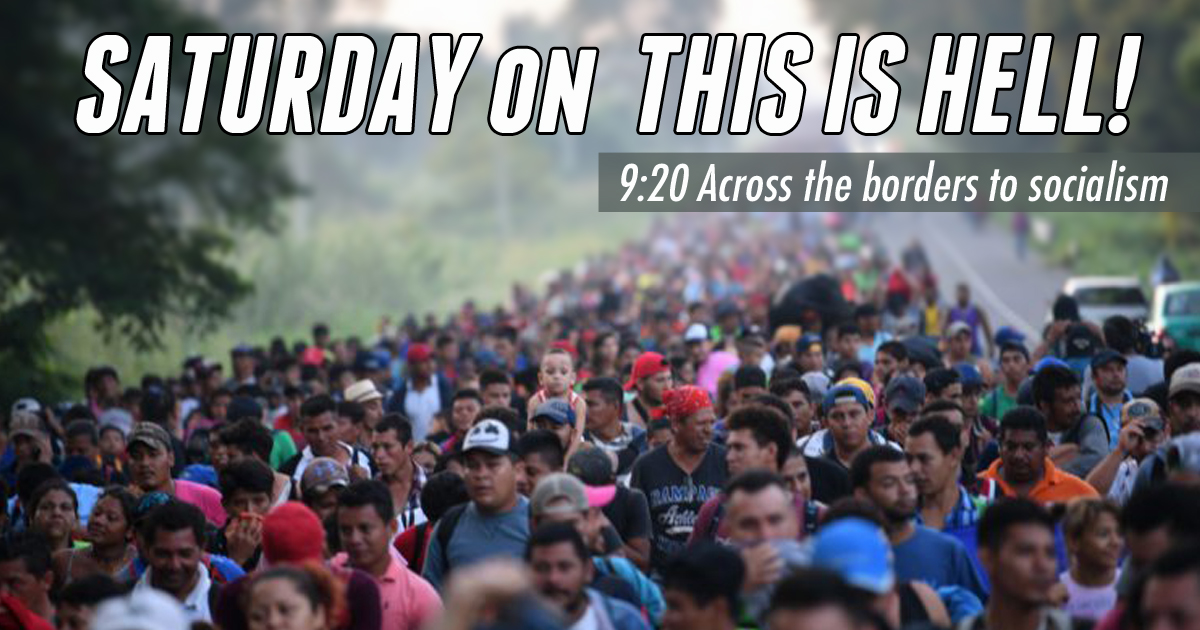 9:20 - Viewpoint Magazine's Magally Miranda Alcazar and Robert Cavooris trace the path of the migrant caravan, and the road to solidarity.

Maga and Robert are members of the editorial collective that wrote the essay The Border Crossing Us for Viewpoint Magazine.