Reminds me of some advice my father gave me. Or, no, not advice, more a chastisement. He said, “Quit dwelling on it!” I don’t remember what it was I was dwelling on, all those years ago, in our old house in Oak Park, Michigan, that starter ranch house with its olive linoleum tile in the kitchen, olive, orange and yellow starbursts scattered on the wallpaper, very hand-scrawled looking, like multicolored versions of Kurt Vonnegut’s famous sketch of a butthole.

In a Moment of Truth, Jeff Dorchen gets lost in the woods of a dying planet, and along the way finds Hillary Clinton, a piece of reasonably priced farm-raised salmon, trauma survivors, an iconic illustrated butthole, nostaligic wax, and the reason he wandered away from everything in the first place.

On this day in 1950 – (66 years ago) — North Korean troops crossed the Thirty-Eighth Parallel in a large-scale invasion of South Korea that opened the Korean War. North Korea’s leader, Kim Il Sung — the grandfather of its current leader, Kim Jong Un — had spent several years building up a massive Soviet-style army. South Korea was largely unprepared, and within days the Northern army worked its way far enough down the peninsula to capture Seoul, the Southern capital. South Korea was forced to seek help from the United States. The Truman administration obtained a UN sanction for a major undeclared war, and the Chinese army came to North Korea’s aid. The Korean War lasted three years, and no one really knows how many people died. But by one estimate, it killed some two hundred thousand South Korean, American, and British troops, another half million on the North Korean and Chinese side, and more than a million Korean civilians. It abounded in massacres, torture, and other atrocities, and it was fought to a stalemate. In 1953 a cease-fire brought the border between the two Koreas back to where it had been before the war, and sixty-six years later, the Korean War remains technically unresolved.

On this day in 1975 – (41 years ago) — days after being convicted of election fraud and stripped of her seat in India’s Parliament, Prime Minister Indira Gandhi — no relation to the nation’s founder, Mahatma Gandhi — responded to widespread protests, strikes, and calls for her resignation by having a nationwide state of emergency declared, which allowed her to rule the country by decree. Elections were postponed, press freedoms were curtailed, and TV and radio stations were forced to broadcast government propaganda. Many newspapers responded to the censorship with carefully veiled satire — one, the Indian Express of Delhi, simply published a large blank space on its editorial page. According to Amnesty International, some 120 thousand opposition politicians, protesters, strike leaders, and dissidents were arrested and detained without trial, and some were allegedly tortured. Meanwhile, the prime minister’s son, Sanjay Gandhi, led a program of forced sterilization in which some eight million people were pressured into receiving vasectomies or tubal ligations. But after twenty months, Indira Gandhi finally... read more 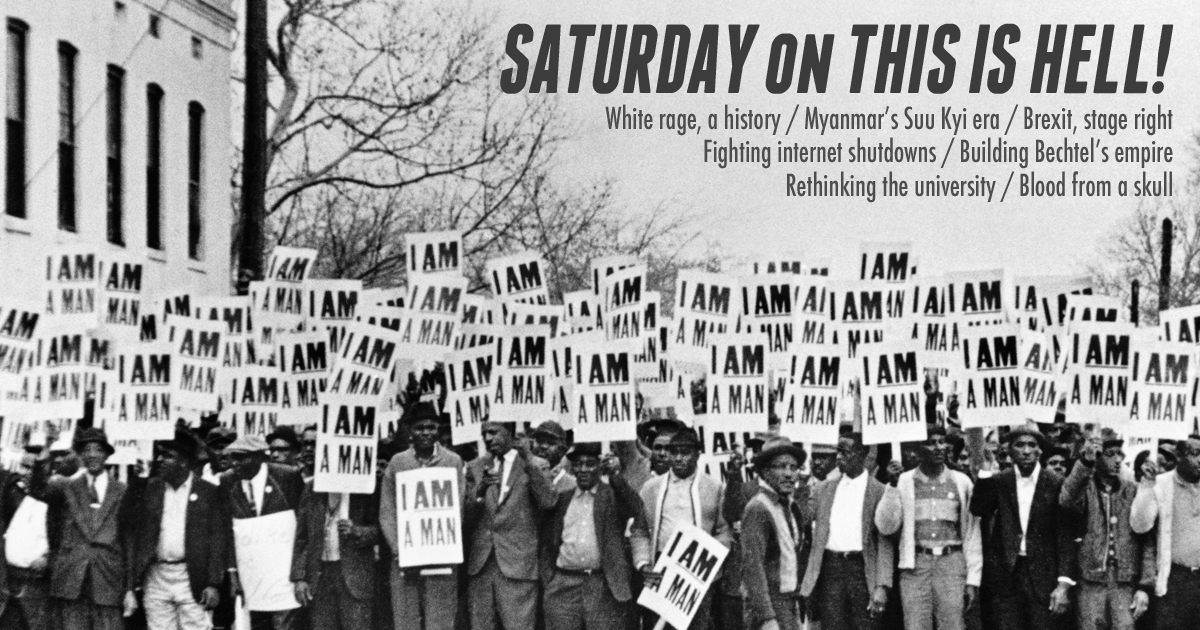 9:10 - Historian Carol Anderson surveys a long history of White rage in the face of Black progress.

Carol is author of White Rage: The Unspoken Truth of Our Racial Divide from Bloomsbury.

Sean will be making his first Irregular Correspondent report from Yangon, talking about his Frontier Myanmar article The Sanctions Saga.

10:25 - Our Man in London, David Skalinder files one last report from the UK, fittingly on the Brexit vote.

David will be on the phone with us while movers are hauling away his stuff, which adds an appropriate vibe to the whole report.

10:40 - Access Now's Peter Micek explains the stakes in the battle against internet shutdowns.

Sally is author of the Simon & Schuster book The Profiteers: Bechtel and the Men Who Built the World.

12:05 - The Undercommoning collective make the case for a radical rethinking of the university.

Undercommoning's Max, Cassie and Brianne will be talking about their ROAR Magazine article Undercommoning within, against and beyond the university-as-such.

12:40 - In a Moment of Truth, Jeff Dorchen tells us what it's like to drink blood from a skull.

Sounds like Jeff's newfound Hillary support must have ended its begrudging phase.

The Profiteers: Bechtel and the Men Who Built the World - Sally Denton [Simon & Schuster]

On this day in 1815 – (201 years ago) — some 65,000 troops lay dead, wounded, or missing in the immediate aftermath of the Battle of Waterloo, in which French troops loyal to Napoleon Bonaparte were defeated by a multinational force that was led by the Duke of Wellington, and made up of soldiers from England, Ireland, Scotland, Prussia, Holland, Belgium, and other European countries. The defeat brought an end to Napoleon’s domination of Europe and his dreams of greater conquest. Napoleon was soon forced to abdicate as emperor of the French, and he was sent into exile for the rest of his life on the remote South Atlantic island of Saint Helena. On the field of battle, meanwhile, scavengers carrying pliers and buckets hurried to and fro among the decaying corpses to pull and collect the dead soldiers’ teeth — which they then sold to dentists, who used them to make dentures. The dentists did not conceal the origins of the teeth from their customers. On the contrary, some proudly advertised their dentures as being made from “Waterloo teeth.”

On this day in 1972 – (44 years ago) — British European Airways Flight 458, en route from London Heathrow to Brussels, went into a deep stall shortly after takeoff, and crashed near the town of Staines, England. All 118 passengers and crew aboard were killed. The accident occurred in the context of a threatened air pilot’s strike over pay, conditions, and the hazard of airline hijacking, which had become common in the early 1970s. Not all BEA pilots were in favor of the strike, but many co-pilots had already walked off the job, to be hurriedly replaced by recently hired rookies. An inquest later concluded that the crash of Flight 458 was due mainly to several oversights and bad decisions made by inexperienced crew members. 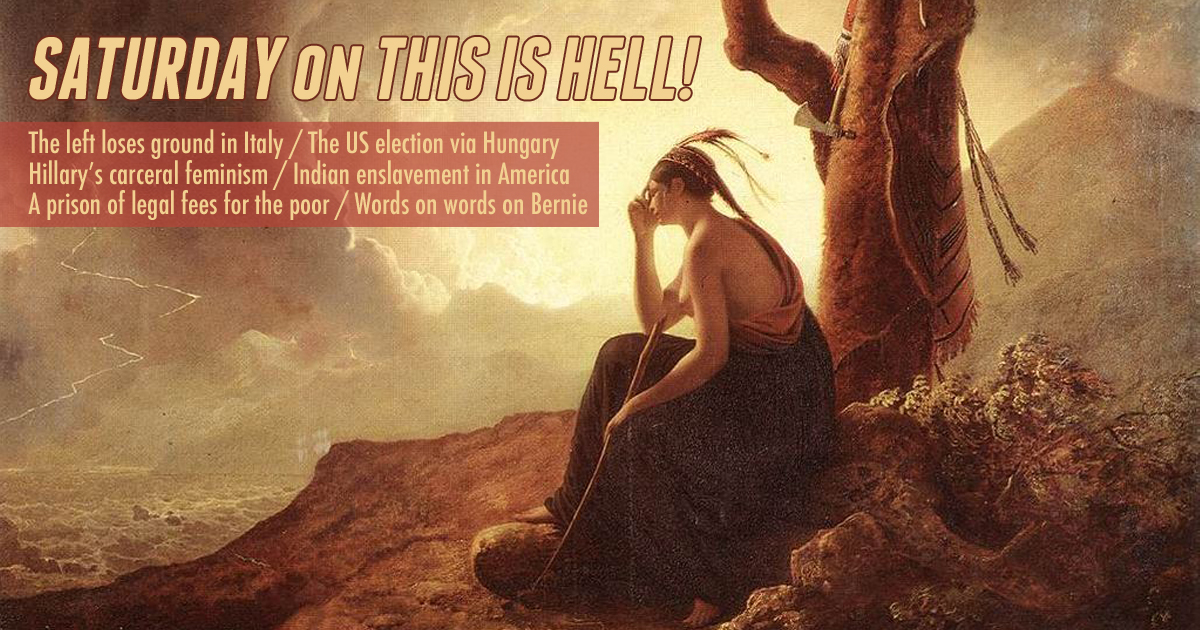 10:05 - Live from Budapest, Todd Williams reports on the power of right wing populism, in Hungary and the US.

Alexes is author of A Pound of Flesh: Monetary Sanctions as Punishment for the Poor from the Russell Sage Foundation.

12:45 - In a Moment of Truth, Jeff Dorchen continues his hostile plea for an end to hostilities.

As we learned last week, it involves you voting for Hillary Clinton if that helps your hostility at all.

The Other Slavery: The Uncovered Story of Indian Enslavement in America - Andrés Reséndez [Houghton Mifflin Harcourt]

A Pound of Flesh: Monetary Sanctions as Punishment for the Poor - Alexes Harris [Russell Sage Foundation]

On this day in 1805 – (211 years ago) — the city of Detroit caught fire and almost completely burned to the ground. Detroit was just a territorial outpost then — an inland seaport, population about six hundred. Lacking any real fire department, the citizens formed a bucket brigade, passing pails of water hand-to-hand from the Detroit River to the burning wooden buildings. Of course, it was hopeless. And soon there was nothing left of the city but one stone building and a few brick chimneys. Amazingly, no one was killed.

On this day in 1837 – (179 years ago) — in Boston, long-simmering tensions between New England Yankees and recent Irish immigrants erupted in violence when a group of firefighters, emerging from a saloon after having put out a fire, ran into an Irish funeral procession on Broad Street in the city center. Trash talking and insults gave way to pushing and shoving, then kicking and punching, and finally an open riot. Estimates vary, but thousands of people were apparently involved, as rioters threw rocks and looters broke into nearby homes. The unrest eventually forced Mayor Samuel Eliot to call in ten military units to make arrests and bring an end to what is still, to this day, regarded as the worst riot in the history of Boston.

On this day in 1963 – (53 years ago) — not one but three rotten historical events occurred within a time span of twenty-four hours. In Saigon, Vietnam (known today as Ho Chi Minh City), in the presence of several international journalists, a Buddhist monk named Thích Quảng Đức calmly sat down in a busy intersection, had gasoline poured on himself, and set himself on fire as a protest against the persecution of Buddhists by the South Vietnamese government of President Ngo Dinh Diem, who favored the country’s Roman Catholic minority. Gruesome photographs of the monk burning to death shocked the world.

In Tuscaloosa, Alabama, Governor George Wallace, recently elected on a campaign promise to keep the state’s schools racially segregated in defiance of federal law, staged a political media stunt by standing in the doorway of a University of Alabama building to prevent two black students from entering to register for classes. Wallace was forced to back down after National Guard troops, acting on orders from President John Kennedy, ordered him to step aside and let the students... read more 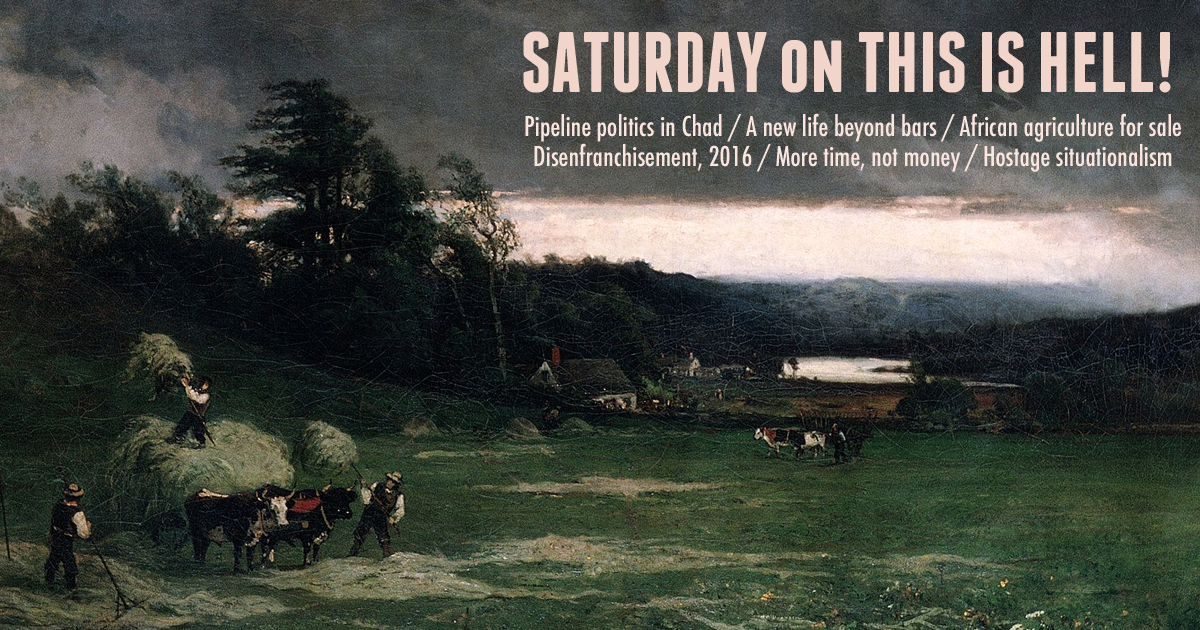 9:10 - Sociologist Lori Leonard examines the collapse of a corporate pipeline project in Chad.

Lori is author of the new book Life in the Time of Oil: A Pipeline and Poverty in Chad from Indiana University Press.

11:35 - Investigative journalist Greg Palast presents your guide to not being able to vote in the year 2016.

Earlier this week Greg posted the article How California is being stolen from Sanders right now.

12:05 - Social historian Eva Swindel makes the case for reclaiming time, not money, from the demands of capitalism.

Eva is author of the Monthly Review article Radical Leisure.

12:45 - In a Moment of Truth, Jeff Dorchen tries to talk us out of shooting our hostage before we have the ransom.

Is the Bernie the hostage or the ransom in this scenario?