On This Day In Rotten History...

On this day in 1457 BC – (3,473 years ago) — in the earliest military battle that modern historians view as being reliably documented, Egyptian armies and a coalition of Canaanite forces faced off at the Canaanite city of Megiddo, in what is now northern Israel. Pharoah Thutmose III led some ten to twenty thousand chariots and infantry against a roughly equal-sized force led by the king of Kadesh. Thutmose outmaneuvered the Canaanites, and his forces entered the walled city and plundered it, laying siege to the city for seven months until the Canaanites surrendered. Thutmose’s armies later continued through Syria and Mesopotamia, pillaging towns, burning crops, and taking prisoners. The establishment of Egyptian dominance over Palestine was a key episode in Thutmose’s expansion of the Egyptian empire to its greatest geographical extent — stretching from what is now Syria all the way south to what is now Sudan.

On this day in 1847 – (169 years ago) — a junior British army officer shot a minor chief of the Wanganui people, of the indigenous Maori of New Zealand. The incident triggered a series of clashes between Maori warriors and British forces that became known as the Wanganui Campaign, and which hinged mainly on the disputed legality of sales of Maori land to British settlers. The fighting extended into July and resulted in several deaths on both sides. But the Wanganui Campaign would only be the beginning of the larger New Zealand Wars, which would drag on for another twenty-five years as Maori tribes across New Zealand tried to form a united government to defend their lands against European colonialists. The wars would claim the lives of more than two thousand Maori people and some eight hundred British and colonial troops. They would end with the colonial confiscation of more than six thousand square miles of Maori land.

On this day in 1943 – (73 years ago) — in Basel, Switzerland, Albert Hoffman, a chemist employed in research and development for the pharmaceutical company Sandoz, accidentally touched his finger to his mouth or eye while working in the laboratory with the chemical lysergic acid diethylamide, also known as LSD. Over the next few hours, he inadvertently became the first person to discover that chemical’s hallucinogenic effects. He later wrote: “In a dreamlike state . . . I perceived an... read more 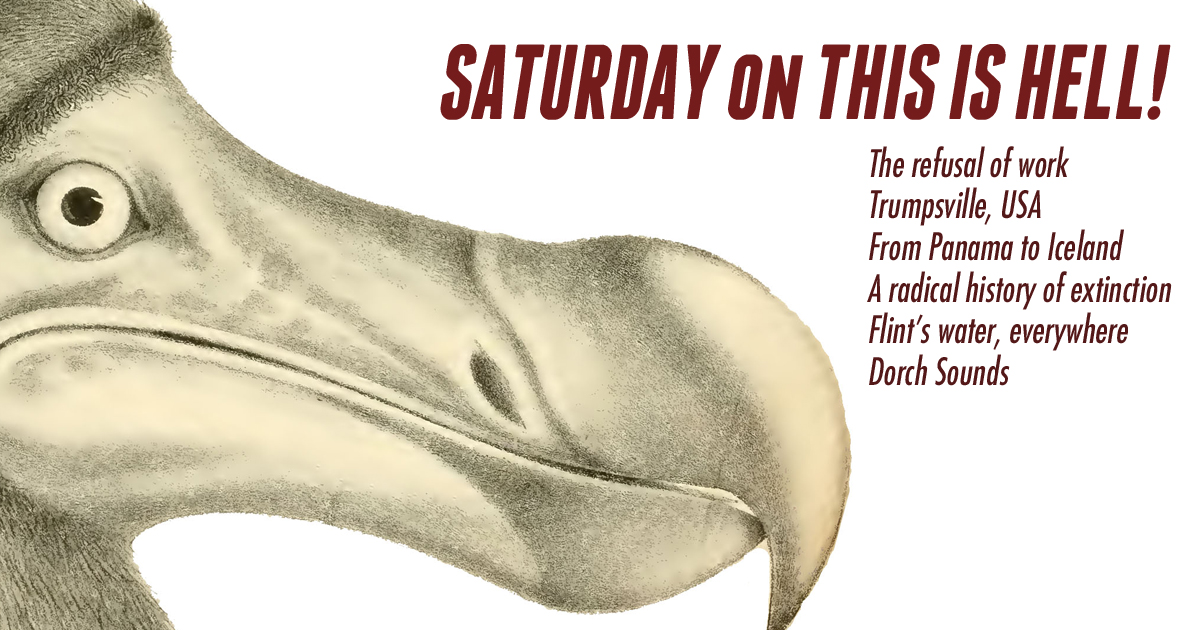 David is author of The Refusal of Work: The Theory and Practice of Resistance to Work from Zed Books.

Sarah recently wrote Metropolis, the hometown of Superman, has a new hero: Donald Trump for The Guardian. We'll also dig into her report on freedoms in Uzbekistan for Freedom House's Nations in Transit series.

Ashley is author of Extinction: A Radical History from OR Books.

Laura wrote the In These Times piece Why Your Water Could Be Worse Than Flint’s.

12:45 - In a noncommittally previewed Moment of Truth, Jeff Dorchen does his usual schtick.

It will be a good segment, but that's all we know about it, if you couldn't tell from the above description.

Metropolis, the hometown of Superman, has a new hero: Donald Trump - Sarah Kendzior [The Guardian]

Conservatism, A History (Best Of...)

On April 2nd in Rotten History...

On this day in 1863 – (153 years ago) — in Richmond, Virginia — capital of the Confederacy during the US Civil War — bread riots broke out in the center of town as thousands of people broke into shops and looted food, clothing, and other merchandise. The rioters, mostly women, were angered by the same shortages of bread and other staples that were making similar riots a common occurrence across the American South that spring. Hungry troops on both sides of the Civil War had been stripping local farms of their crops and livestock during their movements from one battle to the next. To make matters worse, runaway inflation was making Confederate currency increasingly worthless. In Richmond, the Confederate president, Jefferson Davis, came out and pleaded with the rioters to disperse. He even threw them the money he had in his pockets. But the rioters ignored Davis until he finally called in the militia and threatened to have them open fire on the crowd.

On this day in 1982 – (34 years ago) — Argentina launched an amphibious invasion of a nearby South Atlantic archipelago known to the Argentines as the Islas Malvinas, and to the British as the Falklands. These cold, windswept islands — where less than three thousand people lived mostly by fishing and sheep farming — had been ruled by Britain for some 150 years, but Argentina had never given up its own claim to them. And now, Argentina’s ruling military junta had ordered an invasion in the hope of distracting that country’s increasingly discontented populace from their economic woes and lost civil liberties. The Argentine generals were gambling that the Brits would not use military force to keep the islands — and at first, it seemed that their bet would pay off, as the Argentine invaders met little resistance from the islands’ tiny self-defense force, bolstered by a few dozen British troops. But when British Prime Minister Margaret Thatcher sent a major naval task force to retake the islands, it led to a war that lasted more than two months, killed some nine hundred people, and ultimately caused the downfall of the Argentine junta. The Falklands remained firmly in British hands — and Port William, the territory’s busiest ship harbor, remains heavily mined to this day. 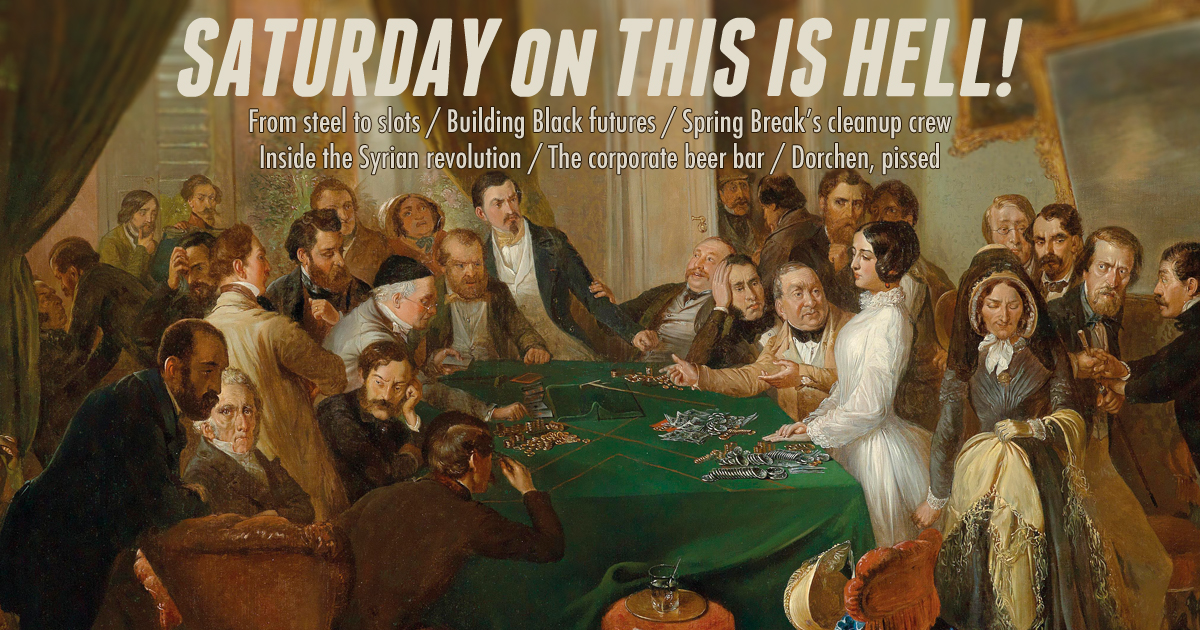 Chloe is author of From Steel to Slots: Casino Capitalism in the Postindustrial City from Harvard University Press.

10:05 - BYP100's Janaé Bonsu presents a plan and a path to economic justice for Black America.

Janaé is one of the authors of the BYP100 report Agenda to Build Black Futures.

Robin and Leila are authors of Burning Country: Syrians in Revolution and War from Pluto Press.

Michael will explain how distrubutors and franchises are capitalizing on the cache of craft beer's limited supply.

Found this phrase in a tweet by Hollywood creep Chuck Woolery, hopefully just a coincidence!

On this day in the year 752 – (1,264 years ago) – in Rome, Pope Stephen II died of a stroke just three days after being elected to succeed the former Pope Zacharias. To this day, Stephen II holds the record for the shortest time in office of any Catholic pope.

On this day in 1812 – (204 years ago) – the city of Caracas, Venezuela, was struck by two major seismic tremors within a half hour. The earthquakes leveled the city, along with five nearby towns, and killed some fifteen to twenty thousand people. The tremors were so severe that they created a new lake and permanently changed the courses of several rivers and streams in the area. Since Venezuela was fighting its war of independence at the time, local representatives of the Spanish crown viewed the earthquakes as divine punishment for the colonial rebellion — and the Catholic archbishop of Caracas pronounced the deadly cataclysm “terrifying, but well-deserved.”

On that SAME DAY in 1812 – (again, 204 years ago) – the Boston Gazette published a political cartoon that ridiculed how electoral districts in the state of Massachusetts had been redrawn in such a bizarre and contorted way as to benefit candidates of the state party organization led by Governor Elbridge Gerry. Noting that the long, strange, twisting boundaries on the map of one new district made it resemble the shape of a salamander, the cartoonist labeled it a “Gerry-mander,” after the governor and party boss. The name stuck, and more than two hundred years later, “gerrymandering” remains a favorite practice of party leaders and politcos across America who seek to create inpenetrably “safe” electoral districts for their favored career legislators.

On this day in 1969 – (47 years ago) –  having suffered for months from severe depression and paranoia after his novel The Confederacy of Dunces was rejected by two major publishers, the author John Kennedy Toole committed suicide by running a garden hose from his car’s exhaust pipe into the car. It was almost ten years later that his mother finally managed to browbeat the famous novelist Walker Percy into reading her dead son’s unpublished manuscript. Percy was wowed, the book was published in 1980, and Toole was awarded the Pulitzer Prize for fiction in 1981, twelve years after his death.