If people can become more aware of what food actually is - where it comes from, who grows it, what they go through to grow it, what climate change means for production - if people can begin to understand what the producer needs, and the producer can understand what the people they are provide food for actually want, and have discussions about what's possible and what's not possible... That I would not describe as 'going back' to something old. I would describe it as very potentially a major development, a 'going forward' for all of us.

Helena Paul examines the disasterous consequences of global capitalism and its industrial food system - on the environment, humans and the relationship between us - and explains how a massive shift to the sustainable practices of radical, democratic agroecology.

Helena wrote the article Looking beyond the pandemic: Agroecology, and the need to rethink our food system for Radical Ecological Democracy.

On this day in 1610 – (406 years ago) — King Henry IV of France — credited with promoting religious tolerance, improving infrastructure and public works, and bringing relative peace and prosperity to his country — was assassinated by a Catholic religious fanatic named François Ravaillac. Though Henry had become a popular king, he had also alienated some Catholic zealots by promulgating the Edict of Nantes, which guaranteed religious liberty to Protestants and effectively brought an end to the religious wars that had ravaged France for thirty-six years. Ravaillac, having learned of the route Henry’s open carriage would take through the crowded streets of Paris, was lying in wait when it became caught in a traffic jam. He jumped onto the carriage, fatally stabbed the king in the chest, and was immediately arrested by police. Two weeks later — after several days of interrogation, torture, and a quick trial — he was executed by being drawn and quartered.

On this day in 1931 – (85 years ago) — in Ådalen, Sweden, five people were shot and killed by military troops called in to reinforce local police during a demonstration by thousands of workers on strike against the local timber and pulp industry. The strike had begun as a nonviolent response to pay cuts at one pulp factory in a nearby town, and had quickly spurred solidarity walkouts at other factories across the area. The rallies and marches were peaceful at first, but when the owner of one company hired sixty scabs to come in and break the strike, rising tensions led to fistfights and rock throwing, and the local police were soon overwhelmed. Mounted army troops arrived, and as the situation grew chaotic, they opened fire. Though the soldiers supposedly aimed at the ground to warn and scatter the demonstrators, their bullets hit ten people, five of whom died. Investigators later concluded that none of the demonstrators had been armed. Unfortunately, no one on the scene had yet learned that, earlier the same day, a local government council had already voted to prohibit the strikebreakers from working. In the criminal trials that followed, all but one of the military officers were acquitted, while several strikers received prison sentences. The incident ignited a fierce political debate in Sweden, and led to the formation of a national police... read more 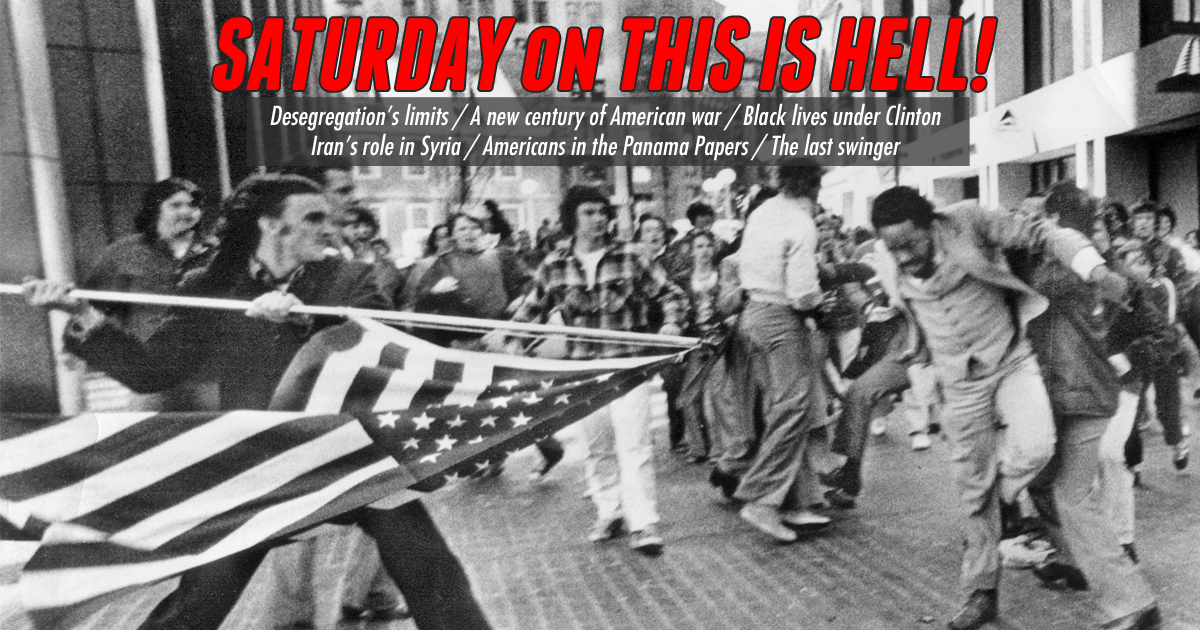 Ansley is author of the new book Making the Unequal Metropolis: School Desegregation and Its Limits from University of Chicago Press.

10:05 - Historian Andrew Bacevich reframes an American century of perpetual warfare across the globe.

Andrew wrote the Harper's article American Imperium: Untangling truth and fiction in an age of perpetual war and the book America’s War for the Greater Middle East: A Military History from Penguin Random House.

11:05 - Historian Donna Murch recalls how the Clintons built their political power over the top of Black lives.

Donna contributed to the Verso Books collection False Choices: The Faux Feminism of Hillary Rodham Clinton, extracted as the piece The Clintons’ War on Drugs: When Black Lives Didn’t Matter for The New Republic.

11:35 - The Radical Pessimist, Kevan Harris examines the factors behind Iran's involvement in the Syrian civil war.

Kevan's forthcoming, first book A Social Revolution: Politics and the Welfare State in Iran has a release date now. Pumped for this!

Mike Hudson's latest writing on the story is Panama Papers Include Dozens of Americans Tied to Fraud and Financial Misconduct for ICIJ.

12:45 - In a Moment of Truth, Jeff Dorchen pits himself against the pendulum.

At least he escaped the flood of rats!

On this day in 1840 – (176 years ago) — the populated areas in and around Natchez, Mississippi, were struck by the second deadliest tornado in US history, a huge funnel cloud that formed southwest of Natchez and moved north along the Mississippi River. The twister flattened homes and businesses along the riverbanks, and destroyed hundreds of steamboats and flatboats. It was so powerful that a chunk of one riverboat was later found to have been blown thirty miles from the river. The tornado also devastated plantations for hundreds of miles in Mississippi and Louisiana. It ripped big trees out of the ground by their roots, and destroyed countless acres of crops. After the storm, the official death toll was given as 317. But the real number of people who died in the calamity was probably much higher, since it happened in a time and place when official death tolls issued by local governments normally did not count slaves.

On this day in 1915 – (101 years ago) — as World War I raged in Europe, the British civilian luxury liner RMS Lusitania was sailing from New York to Liverpool with almost two thousand passengers and crew. New York newspapers had published German warnings about the state of war in the North Atlantic, but many of the Lusitania’s passengers had taken the risk lightly, and its captain had assured them that the ship was fast enough to evade any attacks. But, some twelve
miles off the coast of Ireland, the ship was hit by a torpedo from a German submarine. The torpedo was quickly followed by a second explosion that ripped open the Lusitania’s starboard side. The great ship sank beneath the waves in just eighteen minutes. It had forty-eight lifeboats, but in all the chaos and panic, the crew managed to lower only six of the boats successfully. Other lifeboats were ripped to pieces as they banged and scraped against the sides of the ship. Still others capsized as they hit the water, throwing their screaming occupants into the sea. Almost 1,200 people died, with 761 survivors. Most of the dead were either British or Canadian, while 114 were Americans. The German attack caused outrage not only internationally, but also among Germany’s own political left. And it was the first in a chain of events that led to the United States entry into World War I. 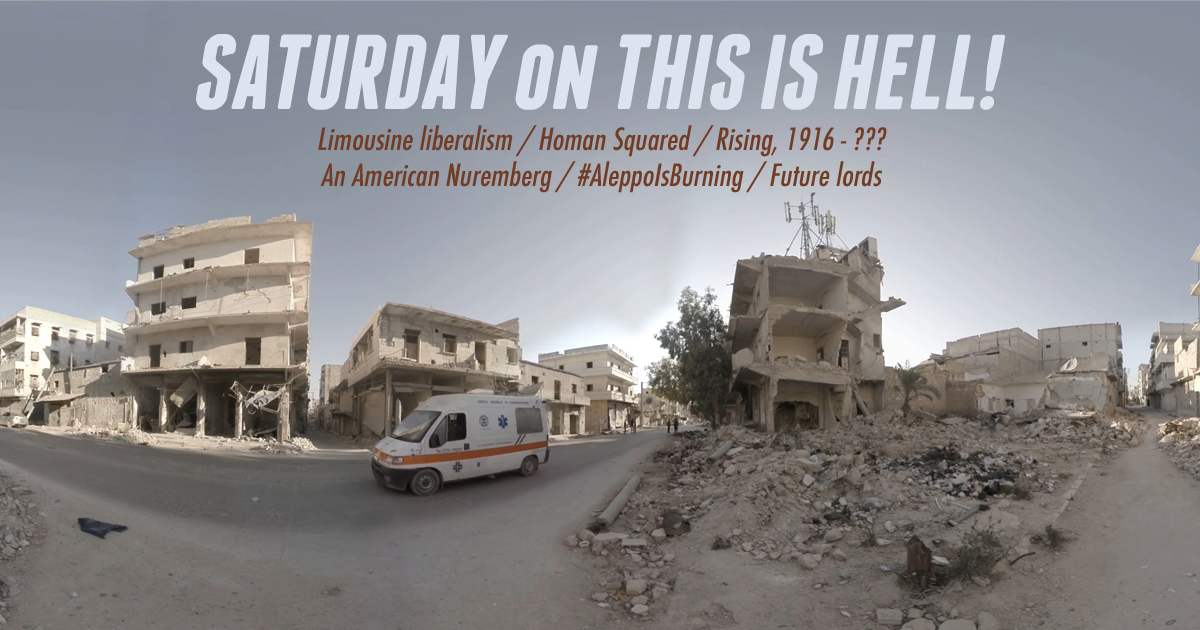 Steve is author of the new book The Limousine Liberal: How an Incendiary Image United the Right and Fractured America from Basic Books.

Flint's latest writing is Homan Square is Chicago's new 'House of Screams for The Guardian.

Sarah wrote the recent articles Getting Your Irish Up and Unexecuted Ideas of an Irish Republic for The Baffler.

11:05 - Author Rebecca Gordon makes the case for the prosecution of officials for post-9/11 war crimes.

Rebecca is author of American Nuremberg: The U.S. Officials Who Should Stand Trial for Post-9/11 War Crimes from Hot Books.

Rami has been in and out of Syria (and a Turkish jail) reporting on the Syrian civil war.

12:45 - In a Moment of Truth, Jeff Dorchen puts the self-appointed lords of the future over his knee.

So much for the chill vibes of last week's segment.

On this day in 1881 – (135 years ago) — the area in and around Moradabad, in northern India, experienced a terrifying storm that battered houses and farms with highly destructive winds and pelted the countryside with hailstones reportedly the size of oranges. Since no severe weather warning systems existed at the time, many farmers were working in their fields when the storm struck, and were instantly killed by the huge hailstones. Once the storm died down, the hail was piled two feet high on the ground in some places. Two hundred forty-six people were killed, along with thousands of farm animals.

On this day in 1900 – (116 years ago) — Casey Jones, an engineer for the Illinois Central Railroad, was killed when his passenger train, the Cannonball Express, plowed into the rear end of a stalled freight train near Vaughan, Mississippi. It was a foggy night and Jones had been running his train at top speed, trying to make up for lost time, when he rounded a curve and saw the stalled freight ahead of him on the main line. Shouting to his fireman to jump from the train, Jones blew his whistle, reversed the throttle, and slammed on his air brake. It was just enough to slow the Cannonball Express from seventy-five to thirty-five miles an hour before it slammed into the freight train’s caboose. Both trains were heavily damaged, the fireman who jumped from the train was knocked unconscious, and a few other people were slightly injured. But most passengers on the Cannonball Express felt only a sudden bump that awoke them in their sleeping cars. The only person killed in the accident was Casey Jones himself. Folk singers would go on to celebrate him as a hero for having given his life to save his passengers. The IWW activist Joe Hill, however, would write and sing a very different tune that denounced Jones as a scab for having refused to join a strike against the Southern Pacific Railroad.