Police unions have become one of the strongest institutions in electoral politics in this country from the 1990s on. And on the one hand you have true believers, like Joe Biden. It's not even cynical to suggest that he is going after police union support. And when it comes to the power of police unions, we have the electoral politics and the funding in elections. But where they are the most dangerous in some ways is how they operate on the local level. Where they are the spokespeople defending the police when they murder black people, or indigenous people, or any people really, and there is a groundswell of protest. And this is where unionists, other leftists come into play, trying to pressure the AFLCIO to kick out the police unions or officers associations or any organization affiliated with that. And this is where our country, the United States, is different when it comes to the role the police plays in society. Some may argue that police are workers, and part of a potentially progressive if not radical or even revolutionary class in this country. But they are not. Not in this country. And they have never part of any revolutionary struggles, unlike almost all other unions. The folks that come out defending murder by police, they are the opponent, the spokesperson, and that is their job, to defend the people in their union, even if they commit murder.

Chuck interviews historian, and activist Austin McCoy on his Baffler Magazine article "After Floyd - If you can’t rein in the police, you can’t save democracy." https://thebaffler.com/salvos/after-floyd-mccoy 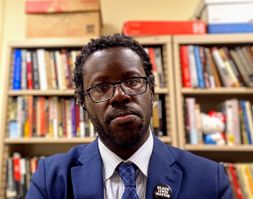 Austin McCoy is a historian and activist, working as assistant professor of history at West Virginia University. He also participated in the anti-police violence movement in Ann Arbor, Michigan. His research interests focus on African American history, the U.S. left, labor and political economy, and social movements and activism. His current manuscript project, tentatively titled, The Quest for Democracy:  Black Power, New Left, and Progressive Politics in the Post-Industrial Midwest revises conventional explanations emphasizing the separation and decline of Black Power and the New Left in the U.S. during the 1970s and 1980s.