The success of white billionaires is supposedly generated because of smarts, good fortune, innovation, good decision-making, and it's never recognized that this wealth was generated on the backs of black and brown labor, and the continued crushing of the black and brown labor. And that's the story that the opponents of critical race theory want to get out there, that this is a meritocracy. That every billionaire out there got where they are because they worked smart, and worked hard, not recognizing that capitalism has always been built on the backs of the labor class, and especially on the backs of black and brown workers. And I think there is a through line to American fascism with this. I think those that descended on the Capitol on January 6, that there is a feeling after the George Floyd protests, that white supremacy is at its last gasp. And I felt that the insurrection was made up by individuals who did not want to see an America made up of equal opportunity. 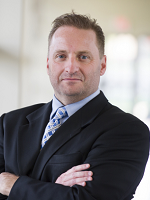 Drew is a legal scholar, lawyer, and associate dean for faculty development at the University of Arkansas, Little Rock.

Kalvin is a recent graduate of the William H. Bowen School of Law at the University of Arkansas, Little Rock.